How One Simple Solution Has Saved Thousands of Babies 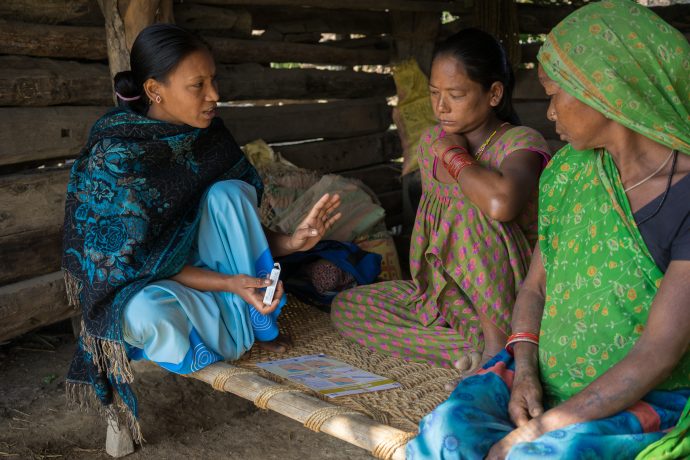 Jharana Kumari Tharu, a community health volunteer in Nepal, visits the home of Syani Tharu, who is eight months pregnant, to counsel her on how a simple tube of chlorhexidine antiseptic gel, applied to her baby’s cut umbilical cord stump, could help prevent infection and even death. / Thomas Cristofoletti for USAID

Every year, an estimated 2.6 million babies die within their first month of life. About 15 percent of these deaths are caused by complications from severe infection – which, in most cases, can be avoided with simple, cost-effective interventions.

Since 2002, USAID and its partners have been working to scale up the use of one life-saving intervention in particular – chlorhexidine, an antiseptic. Chlorhexidine, which comes as either a gel or a liquid, is safe and simple to use, easy to manufacture, and affordable.

Chlorhexidine is commonly used by hospitals to disinfect skin before surgery and to sterilize surgical instruments. In low-resource countries, it can also be used to protect the umbilical stumps of newborns to prevent life-threatening complications from infection.

Some communities see these types of severe infections regularly due to traditional home birthing practices, such as cutting umbilical cords with dirty household tools and then treating the stump with turmeric or even cow dung, and other unsanitary birthing conditions. By comparison, in high-resource countries severe infections occur in less than 1 percent of newborns.

Studies showed that one-time chlorhexidine treatment can lower the risk of severe infection by 68 percent and infant death by 23 percent. Impressed by these results, the Government of Nepal piloted a USAID-supported chlorhexidine program in 2009. Two years later, chlorhexidine was integrated into routine care nationwide with support from Saving Lives at Birth: a Grand Challenge for Development, also co-funded by USAID.

The scale-up program in Nepal is estimated to have saved over 9,600 infant lives since its inception. In less than 10 years, chlorhexidine impressively achieved national coverage.

Today, more than 1.3 million newborns throughout the country have benefited from this simple treatment.

The Government of Nepal has been instrumental in scaling up chlorhexidine. From integrating it into packages that promote maternal and child health, to procuring chlorhexidine tubes and training healthcare workers, the government has been a strong advocate for use of the antiseptic.

The introduction of chlorhexidine in Nepal was further guided by the Chlorhexidine Working Group, a team of representatives from various local and international organizations. Hosted by USAID’s partner PATH, this group was formally established in 2012 to help speed up the scale-up progress.

Typically, decades pass before global health innovations take off in low-and-middle-income countries, according to an analysis by the Bill & Melinda Gates Foundation, Dalberg Global Development Advisors and the Boston Consulting Group. The speed of the chlorhexidine scale-up in Nepal compares favorably to health innovation launches in the United States and other developed countries, which typically take about five years.

So, the question then becomes, how can easy wins from the successful scale-up of a life-saving, low-cost intervention in Nepal be carried over to more countries and across other interventions?

According to a recent report, some factors that contributed to the rapid scale up of chlorhexidine in Nepal and beyond included the ability to produce it locally, extensive market research, policy and advocacy work, and collaboration between government and the private sector.

From the outset of the program in Nepal, the Chlorhexidine Navi Care Program, implemented by John Snow Inc. (JSI), was designed to serve as a “living university” for chlorhexidine scale-up. JSI, USAID and the Government of Nepal carefully documented what was working – and just as importantly, what was not working – to share invaluable lessons.

These organizations partnered together to host learning visits for officials from countries interested in introducing and scaling chlorhexidine. All program-related materials were also made publicly available for other countries’ use.

The impact of Nepal’s success reached beyond its borders and paved the way for countries such as Nigeria, Bangladesh, Pakistan and the Democratic Republic of Congo to begin their own journeys to use chlorhexidine to reduce high rates of newborn deaths.

Nigeria, a country with the third-highest number of newborn deaths in the world, has made great strides — from starting chlorhexidine pilot programs in 2013, to developing and implementing a national scale-up strategy and implementation plan by 2016.

As the use of chlorhexidine for preventing newborn deaths continues to grow, the global health community must keep on exploring new ways to introduce and scale up proven life-saving interventions.

The goal? To create a healthier world for generations to come.