I’ve lived in Sierra Leone all my life, including during the Ebola outbreak in 2014 that left communities battered and hopelessness. Today people here are finding a way to heal and to address community issues, which is leading to resiliency, and, ultimately, stronger community-based systems that meet people’s needs.

The Ebola outbreak in West Africa had the same psychological effects on individuals as war.

Not only did many people lose family and friends, but many survivors experienced stigmatization and discrimination once they were able to return to their communities. These stresses increased mental health problems in Sierra Leone, where there are very few mental health providers and little information about psychological pain.

Nearly 30 kilometers from the district headquarters of Kailahun, in the heart of Kissi Teng Chiefdom, sits Koindu town, on the Sierra Leone border with Guinea. Before the civil war began in 1991, Koindu was a vibrant business hub, but was set ablaze by the rebels during the conflict.

People had barely recovered when Ebola struck. As the epicenter of the virus, the city was gripped with fear as families were obliterated and community relations shattered.

As part of the National Mental Health Strategy, CHDs offer psychosocial support that is having a positive effect on the lives of survivors as well as their communities. 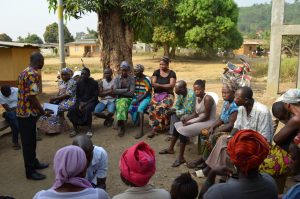 CHD sessions attract more people because of the impact on the ground. Photo: Abdul Samba Brima

The CHDs were readily received because so many people had ongoing frustrations and were ready for solutions. When I visited, I spoke to 25-year-old Taiwa, who spoke of her multiple traumas and how the CHDs helped her.

“When my husband died of Ebola, my children and I were thrown out of the house because everybody thought we carried Ebola,” Taiwa told me. “When I returned to my own family, they too shunned us, fearing we would spread the virus to them. We could not share anything, let alone eat together; it was a difficult situation for my children and me.”

Community healing dialogues are led by trained facilitators who bring community members together to air concerns and think of ways to settle them. The facilitators also refer community members to higher-level mental health or social welfare services as needed. Through these efforts, Ebola survivors who were stigmatized and ostracized are now being accepted back into their communities again.

In Koindu, the discussion groups gave Taiwa a chance to explain her concerns in front of other family members and the community as a whole. With the community group’s support and counseling, they found a solution. Today, Taiwa is reunited with her family. “My children and I are back in my husband’s house, getting along very well with his family. We work his farmland and are happy to carry on his legacy.”

After Koindu, I visited neighboring Kondeboithu, where community members use the CHD sessions to raise awareness about serious problems affecting group members—like economic and livelihood challenges—and find solutions within the community. A woman named Bintu explained how a small microenterprise group came together and helped pay her daughter’s school fee.

“My daughter passed the Basic Education Certificate Examination and was to progress to high school. But my husband had died during Ebola and I had no money,” she said. “I explained the situation to this group and they helped me.”

She said that other members have also benefited from the microenterprise group through different interventions.

To date, more than 705 community members in 45 communities have benefitted from this psychosocial intervention.

I could only admire the spirit and perseverance of this community—once a hot spot of war and Ebola—as it finds answers to the numerous mental health challenges and broader community issues.

I am encouraged to see communities recovering and demonstrating so much resilience in the aftermath of Ebola. With USAID support, communities are being transformed and poised for a better future.