Keeping the Peace: Her Work Helps Prevent Crises Around the World

Posted by Scott Hochenberg on Tuesday, May 1st 2018 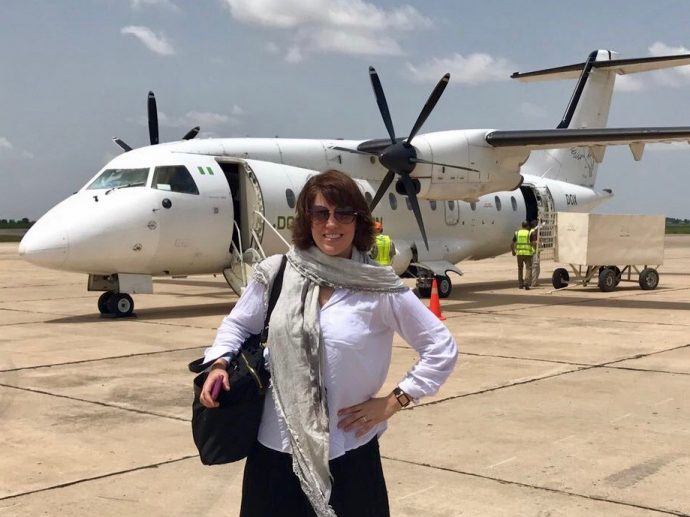 Alexa arrives in Maiduguri, Borno State, Nigeria where her team embedded with NERI and interviewed a number of local civil society organizations (CSOs), academics, and members of the Civilian Joint Task Force (CJTF) as part of Frontier’s broader research on organizational adaptation as a means to counter violent extremist organizations (VEOs).

Running her own business is liberating for Alexa Courtney, the founder and CEO of Frontier Design Group, which is based in Arlington, Va. and is a USAID implementing partner.

However, she did not start out on a traditional entrepreneurial path.

She began her career as a federal civil servant — including time at USAID and the U.S. Department of Defense (DoD) as a conflict specialist and civil-military advisor — but yearned for something different.

When she returned from an assignment at USAID’s Afghanistan mission, Alexa says a senior leader at the U.S. State Department asked her how the Agency was adapting the way it does business to environments like Afghanistan and Pakistan. “I quickly realized that I needed to cultivate new knowledge and skill sets to answer that question effectively, ” she said.

She left the federal government for the private sector, consulting for U.S. Special Operations Command and honing the skills she gained during her field experiences in Afghanistan. But life took a different turn where she could be her own boss.

Today Frontier works on some of the most critical national security questions: How do you design government entities that can innovate and adapt faster than ISIS? How do you prioritize investment in fragile states? What are the metrics of cost effective CVE programs?

“Frontier believes that everyone has a fundamental right to live free from violence and the fear of insecurity,” says Alexa, who believes the nation’s development strategy must evolve just as the threats to national security are evolving. 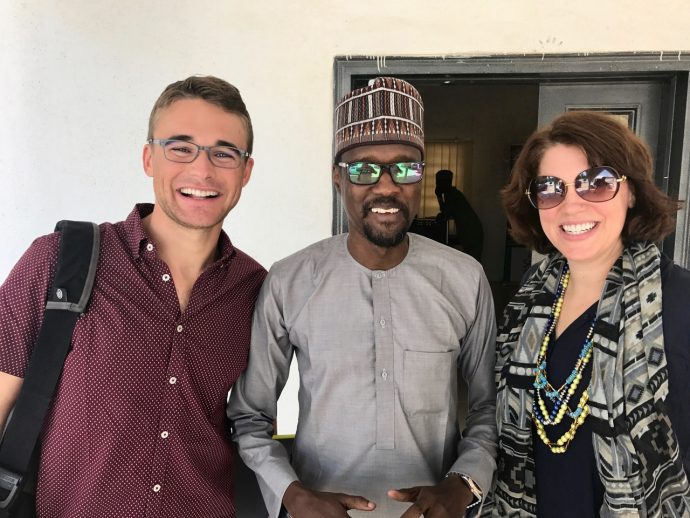 Alexa and Justin with a member of the NERI team in Maiduguri.

Small Businesses, Big Impact
USAID continues to prioritize support to scores of entrepreneurs and small businesses like this one. While the Agency highlighted these efforts work at last year’s Global Entrepreneurship Summit in Hyderabad, India, this work has been happening for decades.

For Alexa, being an entrepreneur is fulfilling and inspiring. “It was a game changer for me to learn about a new sole source authority for woman-owned small businesses that promised to help level the competitive playing field. Now, all of a sudden, women-owned and economically disadvantaged women-owned businesses can be awarded federal contracts on a sole source basis up to $4 million, leveraging their special status much like 8a, Veteran Owned and Service Disabled Veteran Owned small businesses.”

Frontier has worked with USAID’s Global Development Lab and conducted a case study on the Office of Transition Initiatives’ countering violent extremism (CVE) programming in northeast Nigeria. The study aimed to observe, assess and document organizations that operate in complex and insecure environments. The company has also worked with the Army Special Operations Forces CVE organizations, the National Counterterrorism Center on new assessment approaches, and Silicon Valley organizations.

Endless Possibilities, Long Hours
Alexa describes her business as thriving in a constant state of creativity and possibility; if workers there can dream up an idea and get it funded, they can do it. The endless possibilities are incredibly energizing, but also come with hard work and long hours.

“Fortunately, everyone here is having fun together and learning from each other. We are alums from USAID, State, USIP and industry. We’re an eclectic crew but we are deeply motivated by the meaningful work of our clients and partners,” Alexa said.

Alexa’s advice for prospective women entrepreneurs who want to follow her lead is: “Go for it! But be realistic about the commitment and be prepared for total immersion—60-plus hour work weeks over several years. If you have the right clients and team, it won’t always feel like work but it will take up most of your time and attention.”

Scott Hochenberg is a Program Analyst in USAID’s Bureau for Legislative and Public Affairs.

« Generating Trade With — and Within — East Africa
Where It’s Risky to Tell the Truth: Press Freedom Declines in Too Many Countries »
Categories: USAID