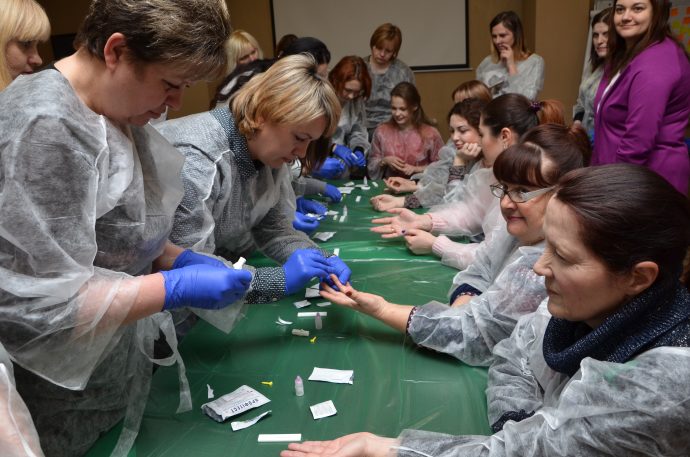 Doctors and nurses training in Odesa to use HIV rapid tests. / USAID

In late 2013 and early 2014, the EuroMaidan demonstrations in Kyiv and the subsequent Revolution of Dignity engulfed Ukraine. Millions of Ukrainians demonstrated across the country and at least a hundred gave their lives to rid the country of a thoroughly corrupt regime.

Ukrainians demanded extensive reforms, more accountability and increased transparency in all sectors of the government. A new government, including a newly-elected president, responded to citizens’ demands by promising widespread reforms that would bring Ukraine closer to European standards and norms.

The justice sector and the health care system are being restructured. Decentralization is bringing government resources closer to citizens, and newly consolidated communities are working to make government services more efficient and accountable. E-governance is helping automate government systems to provide transparency and accountability to government processes. Energy sector reform and the restructuring of the energy supply system, once completed, will provide the country with more energy independence and security. A revamped electoral system, if done properly, will provide safeguards for free and fair elections.

Empowered civil society activists and watchdog organizations oversee these efforts and prod the government forward when uncertainty arises or political will lags. When things go awry, media outlets undertake investigations and report on the scandals.

The effort is not seamless, and progress is often a tough slog. Many citizens complain that they don’t see or feel the changes underway. Sometimes, the government finds it easier to hem and haw rather than push forward.

Yet the dream of many Ukrainians — for Ukraine to become a self-reliant, economically stable country where rule of law and low levels of corruption attract foreign investment and provide them with a degree of prosperity — is certainly attainable.

This past year, we focused on reform initiatives that Ukraine’s leading civil activists identified as crucial for fighting corruption and strengthening democratic governance.

While Ukraine has quite a ways to go before it can declare success in its reforms process and victory over corruption, we believe we’ve helped make considerable inroads.

In October, Ukraine’s Parliament passed landmark health care reform legislation that President Poroshenko signed into law just before the new year. USAID provided substantial support to the Ministry of Health in this effort. The new legislation places primary health care at its center and introduces a “money follows the patient” principle that will increase the quality of care while reducing opportunities for corruption in the system. 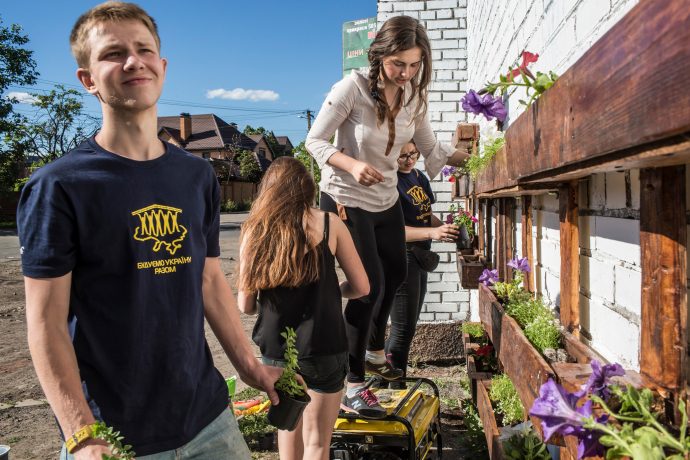 Volunteers beautify public spaces in eastern Ukraine as part of the Build Ukraine Together camp. / USAID

As part of a reform effort to decentralize government and have more decisions and policies set at the local level, communities are being encouraged to consolidate to more effectively manage resources. USAID continued to guide 50 newly consolidated communities in 2017 to efficiently allocate increased budget revenues and promote local economic development. Notably, USAID supported the successful first-ever elections in nearly 600 newly consolidated communities in Ukraine through assistance with grassroots activism, polling and analytics.

USAID also supported Ukraine’s Public Integrity Council, which worked with the High Qualifications Commission on the appointment of a new Supreme Court. While the results of the appointment process were mixed, the new Supreme Court is considered to be better than the previous one, and the selection process was more transparent, including with civil society engagement.

USAID continued to work with government ministries and civil society on e-governance initiatives that further reduce opportunities for corruption. One such USAID-supported effort – the online public procurement system, ProZorro – has saved the government $1.4 billion since 2015.

We are backing additional civil society-led reforms, including the development of a land market to attract investors and the establishment of an Anti-Corruption Court to adjudicate high-visibility corruption cases. We are confident that with time all the changes Ukrainians are demanding will occur.

At the core of the USAID mission remains a deep commitment to working as partners to aid Ukraine’s development and improve the lives of the Ukrainian people. We are proud of our strong partnership with the Government of Ukraine and civil society, and what our cooperation accomplished last year.

Our goal at USAID is unwavering: to continue partnering with the Government of Ukraine, the private sector and civil society to stem corruption, deepen democracy and stimulate inclusive economic growth. We are committed to making Ukraine self-reliant and helping Ukrainians attain the prosperity they desire and deserve.

Susan K. Fritz is the USAID Regional Mission Director for Ukraine and Belarus.

« Making Education Safe for All
A Man Among Men »
Categories: Europe and Eurasia · USAID