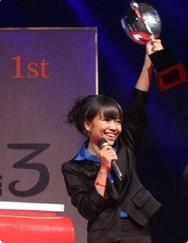 Linda Eang was once known among her family and friends to be shy, so it was quite the surprise when she won a televised debate competition called Next Generation in Cambodia three years ago.

Growing up, Linda was told by her family to stay away from politics. They feared her involvement after seeing so many people killed under the Khmer Rouge regime in Cambodia from 1975-1979. Even now, she says, they can see on the news that people who get involved in politics are sometimes imprisoned or shot.

While Linda is not old enough to remember the darkest days of Pol Pot’s communist dictatorship, her growing awareness of the current challenges facing Cambodia is what inspired her to become involved in student government and debate at her university.

Once she had the opportunity to go to school, Linda learned about the scale of poverty in her country and its under-resourced health care system. “Living in that kind of environment made me want to become part of the solution,” she said. 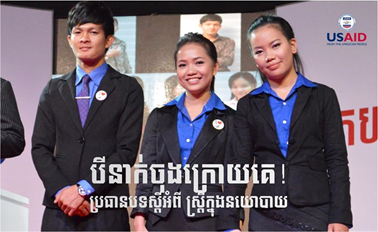 Linda and her teammates from the Next Generation debate competition. / IRI

This inspired Linda to get involved with Next Generation, a project of the International Republican Institute (IRI) supported by USAID.

The initiative was Cambodia’s first televised youth debate competition aired on the most popular television network. Each weekly 30-minute episode brought together 24 selected contestants to debate pressing social and political issues such as poverty, and the electoral system, Facebook censorship and gender quotas in politics. Participants built skills in public speaking and engaged on questions of national importance.

Linda, who was 21 at the time, won first place, and the prize was a study trip to the United States.

“Winning the competition was a turning point in my life,” Linda said. “I never imagined myself standing on stage with the confidence and arguments to convince an audience to vote for my team.”

That experience built up her confidence to amplify the issues she cares about and opened possibilities for future careers that she hadn’t contemplated, such as a job in politics or as a debate coach.

It also helped to expose her to the wider world.

In 2015, Linda traveled to the United States a second time as a youth leader to participate in the State Department’s prestigious International Visitor Leadership program. During the trip, she traveled to Texas, Iowa, Seattle, Washington, D.C. and New York City to learn more about the U.S. 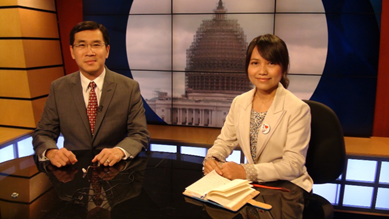 Linda is interviewed by Men Kimseng at Voice of America during her 2014 visit to the United States as part of the State Department’s International Visitor Leadership program. / IRI

She has also won five additional national debate competitions and a regional public speaking contest in China, and served as president of the Pannasastra University Student Senate from 2015 to 2016.

Linda is passionately committed to empowering young people through her debate coaching.

Linda has become a true political buff. Her inspiration comes from watching others, who previously never cared about a particular issue, start to have discussions based on her debates. “After my friends and family watched the debate about whether provincial governors should be appointed or elected, they started discussing that issue, and people in my community who never cared about that issue before started to talk about it,” she said.

She has also become passionate about empowering young people through her debate coaching and as a trainer at her university’s debate club for the last three years.

“The greatest barriers for young people in Cambodia are the lack of trust and motivation from the environment around us,” she said. “We are taught to be followers — and in some cases, it makes young people lose their creativity and stunts their full potential. But I think that’s starting to change as more young people become educated. If we study hard and work hard, I believe a better future is possible for us.”

After deciding she wanted to start an initiative that everyone could join, Linda also launched a new public debate club in January of this year. She coaches members in “expressing their point of view and, most importantly, building their self-confidence.”

Now that she has become something of a celebrity in her country, Linda is determined to use her position to help young Cambodians recognize that they have the capacity to not only change their own lives, but change their country for the better.

“As I explore different areas of work, I find myself that I want to help other people as much as I can,” she said. “Being able to make an impact on other people through debating and life coaching are my biggest passion. I see a lot of potential in young Cambodians. My life purpose is to empower and mentor them to reach their full potential and help to shape the future of this country.”