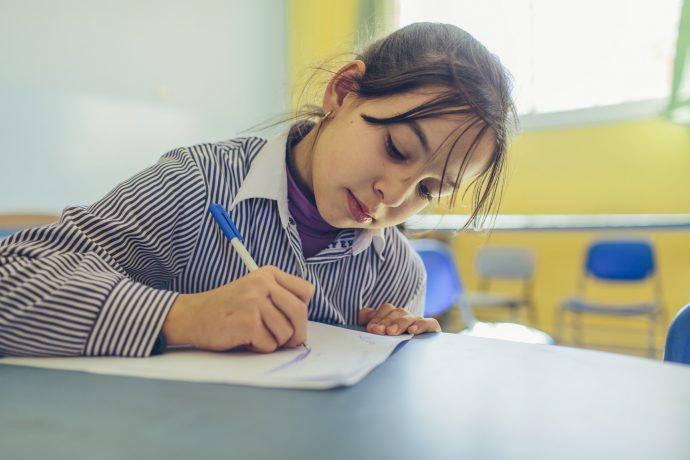 Since 2000, USAID has constructed nearly 3,000 classrooms and renovated 2,700 more allowing many schools to cut class size and eliminate the need for students to learn in shifts. / Bobby Neptune for USAID

To eliminate poverty and reduce reliance on development dollars, we need to empower women and girls.  Gender equality isn’t just a women’s issue—it’s everyone’s issue.  By educating girls and ensuring women have economic opportunities, USAID works toward better future outcomes for all people.

Ensuring that a nation’s girls are educated unlocks human potential, translating into a more productive workforce for that country. A recent study found that every year of secondary school education is correlated with a 10 percent increase in a girl’s future earning power.  If 10 percent more adolescent girls attend school, a country’s GDP increases by an average of 3 percent .

As laid out in the U.S. Global Strategy to Empower Adolescent Girls, USAID, the State Department, the Peace Corps, and the Millennium Challenge Corporation are working together to use adolescence as a point to leverage development and diplomacy efforts. Positive interventions during adolescence can disrupt the cycle of poverty, and instead prepare entire country populations for future GDP growth and thriving economies. 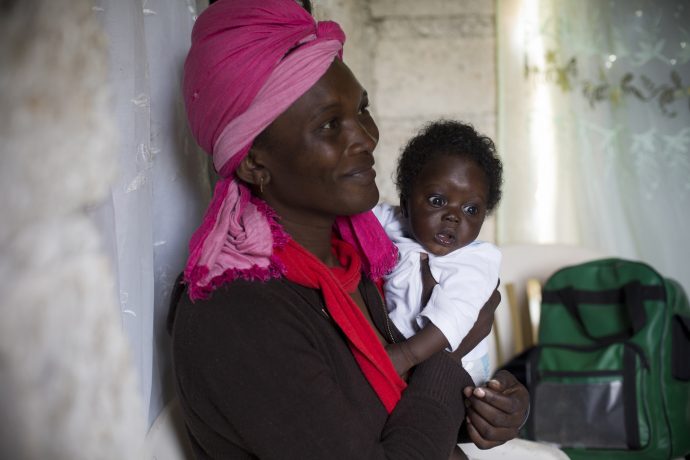 Solita Melus, 33, holds her baby Orelus after he receives immunizations and is weighed by Ketcia Orilius, a community health worker in Haiti. At 3 months old, Orelus weighs 5 kilos, a weight that Ketcia tracks on her tablet. / David Rochkind, USAID

Worldwide, women own or operate up to 33 percent of all private businesses, and women-owned enterprises grow faster than those owned by men and faster than businesses overall. And yet, only half of all women of working age, compared to three-quarters of men, are in the workforce. If the same number of women participated in the global economy as men, the world could grow in GDP by $12 trillion.

In developing economies, women are 20 percent less likely to have a formal bank account than men, and are substantially less likely to use savings and lending instruments. These means it is more difficult for women to start a businesses. USAID saw this challenge as an opportunity, and now e-payments are the default payment method for our programming and development assistance. Since switching from cash to e-payments, providers estimate that Bangladesh alone has saved 40,000 hours in staff time and $60,000 per year, while bringing thousands of previously unbanked women into the financial system.

Caring for Mom and Baby

In developing countries, a mother’s death in childbirth means her newborn is about eight times more likely to die in the first year of life than one whose mother was alive. USAID is working in 25 countries around the world to end preventable child and maternal deaths.  By focusing on cost-effective, high impact interventions, we have helped reduce maternal deaths globally by nearly 50 percent since 1990. And in the past ten years, U.S. Agency for International

Development (USAID) efforts have contributed to saving the lives of more than 4.6 million children and 200,000 women.

These development objectives are interrelated: Researchers estimate that over 50 percent of the decline in child deaths between 1970 and 2009 can be attributed to increased educational attainment by mothers. This research brought together USAID’s education, health, and economic empowerment development strategies: Each piece of development impacts another. By investing in women and girls, and providing them with education and economic opportunities, we are able to ensure that their children and families are safe and healthy – thereby impacting households and communities.

I just returned from New York where I attended the UN Commission on the Status of Women, and we discussed women’s empowerment in many forms. At USAID, our programs provide opportunities for education, economic empowerment, and better health for women to determine their life outcomes, and influence decision-making in households, communities, and societies.

As Women’s History Month comes to a close, we hope you continue to honor the women who have overcome barriers, pioneered the paths that all of us walk—women and girls, men and boys—and continue to contribute to a better future. We will continue to work for increased opportunity and prosperity for women and girls—leading to a more stable and secure world for everyone, everywhere.

Marita Eibl is the Acting Senior Coordinator for Gender Equality and Women’s Empowerment at USAID.