On Christmas Eve 2008, I got a phone call that turned into a professional and personal opportunity of a lifetime. On the other end of the line: the acting director of USAID’s Office of U.S. Foreign Disaster Assistance (OFDA).

The Ol Dionyo Lengai Volcano in Tanzania had been erupting explosively since 2007, and the Government of Tanzania was requesting assistance from the U.S. to determine how much of a threat “the Mountain of God”—in local Maasai language—posed to people living nearby.

Standing in Target, in the midst of last-minute shopping, my first thought was “Can this wait for a few days?” But I knew all too well that the approximately 1,500 potentially active volcanoes around the world never take a vacation. 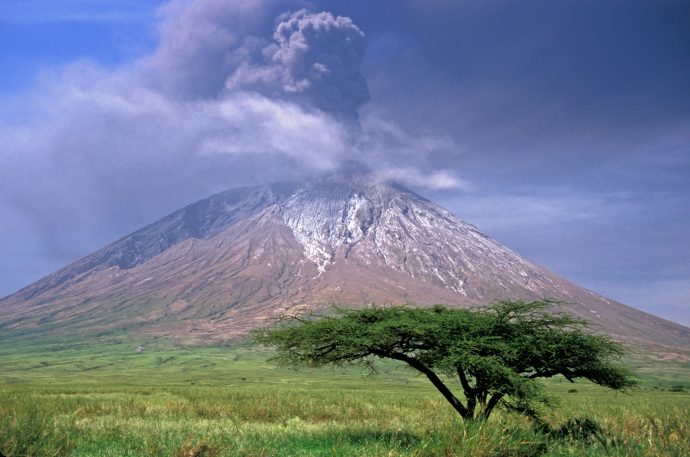 USAID’s Volcano Disaster Assistance Program (VDAP) has responded either in-country or remotely to hundreds of potential volcanic events, trained scientists and others in 23 countries to respond to potential eruptions, and helped partner organizations save tens of thousands of lives.

It is the only international response team that deploys around the world to help prevent eruptions from becoming disasters. And this year, we’re celebrating 30 years.

The program began in 1986 in response to the tragic eruption of Nevado del Ruiz Volcano in Colombia, which killed more than 23,000 people from volcanic mudflows. Today, at the request of affected governments, VDAP teams help fellow scientists monitor volcanic activity, assess hazards, generate eruption forecasts, and develop early warning capabilities to get people out of harm’s way.

I work for the U.S. Geological Survey (USGS), but for the past 12 years I’ve been on loan to OFDA, where one of my duties is monitoring the latest reports of volcanic activity to evaluate the risks they pose and make recommendations on how we should respond. 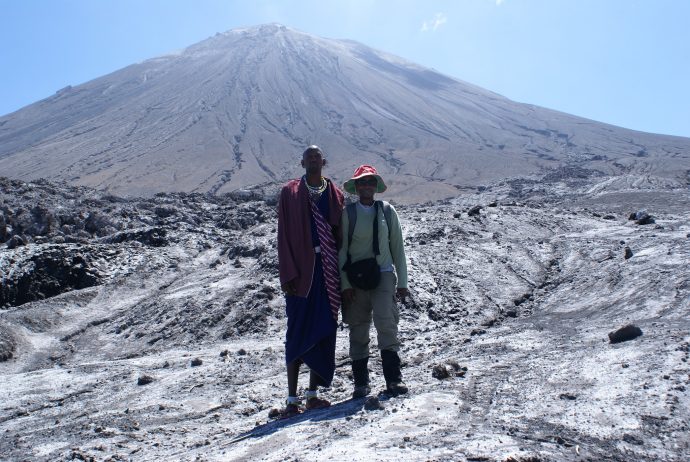 And shortly after that New Year’s Day in 2009, I got on a plane to Tanzania with two other members of the VDAP team—putting those skills to use on the ground. 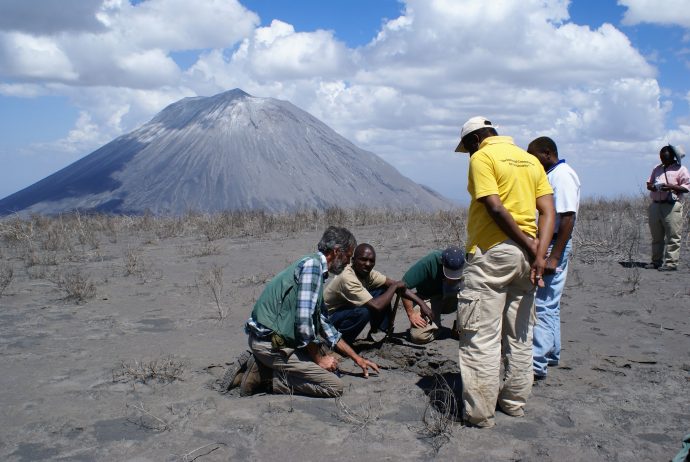 My first VDAP deployment was an incredible experience. Ol Dionyo Lengai is a one-of-a-kind volcano that spews a unique natrocarbonatite lava that erupts black but turns white when it cools and has a much lower temperature than other types of lava. 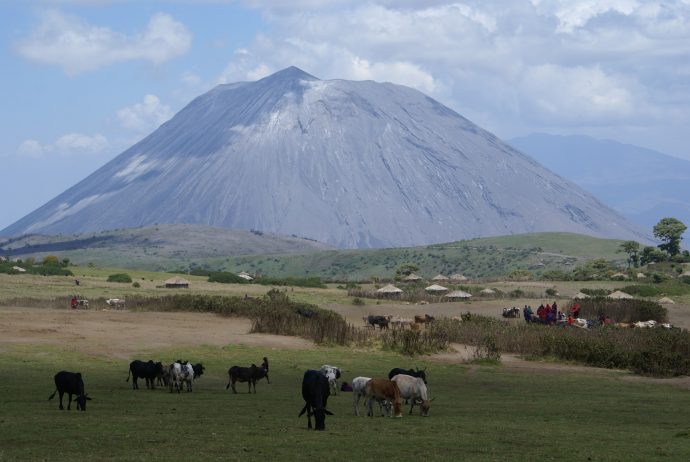 Naiyobi village, located about 15 km west of Ol Dionyo Lengai, had been most affected by eruptions with ash falling repeatedly in the village. / Gari Mayberry, USAID/USGS

But is the volcano safe? To figure that out, we worked with geologists from the Geological Survey of Tanzania and the University of Dar es Salaam to conduct hazard assessments.

It may sound mundane, but it was hands-on work. Scientists dug into ash deposits to get an idea of how much volcanic material had erupted and could impact populated areas. We hiked for miles around the volcano looking at past deposits to try to piece together the mystery of its previous eruptions, to give us a better idea of what it is capable of doing in the future.

Our research found that the location of the village, up on a ledge, in full view of the volcano, would provide protection from pyroclastic flows—fast-moving currents of hot gas and rock— and other deadly hazards should an eruption occur. 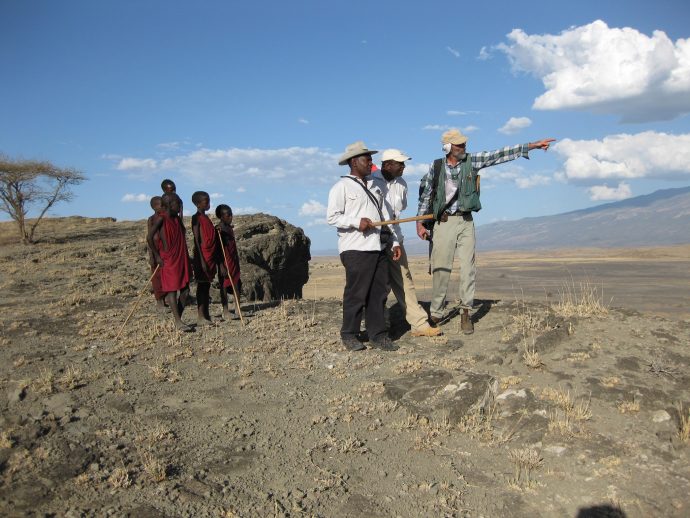 A VDAP team member consults with scientists from the Geological Survey of Tanzania while children observe. / Thomas Casadevall, USGS

I love this volcano. It’s very off the beaten path, usually dwarfed in popularity by neighboring Mt. Kilimanjaro, and immersed in amazing wildlife. Working among the people who live around the volcano and make it part of their lives was magical. 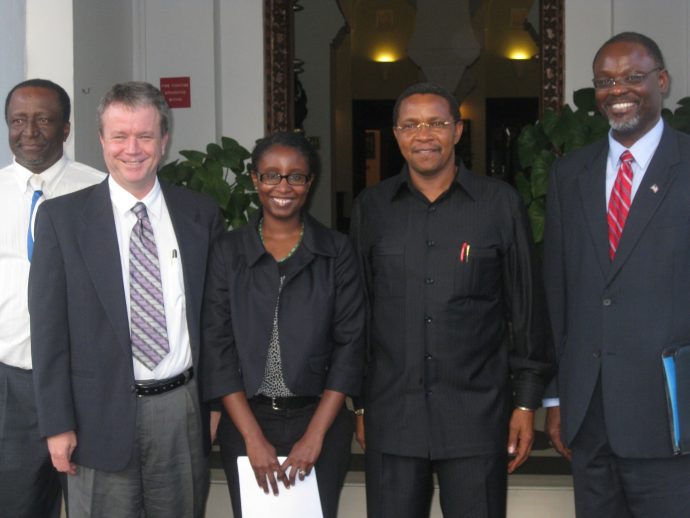 After assessing hazards at Ol Dionyo Lengai Volcano in Tanzania as part of a VDAP team, geologist Gari Mayberry briefed Tanzanian President Kikwete at the President’s Office in 2009. / Embassy staff

You might think: Who would want to live near a volcano? But traveling to the villages and seeing the stunning contrast between the dry, bareness of the volcano against the lush, green land of nearby Naiyobi village, you could see why people make their homes there. It’s simply beautiful.

I feel really proud working with this amazing VDAP team. As an African-American scientist, I know that while volcanology is fairly well represented by women, there aren’t that many minorities working in the field. It’s probably why Tanzanians found it interesting that someone who looked like them was coming from America to work with their scientists. 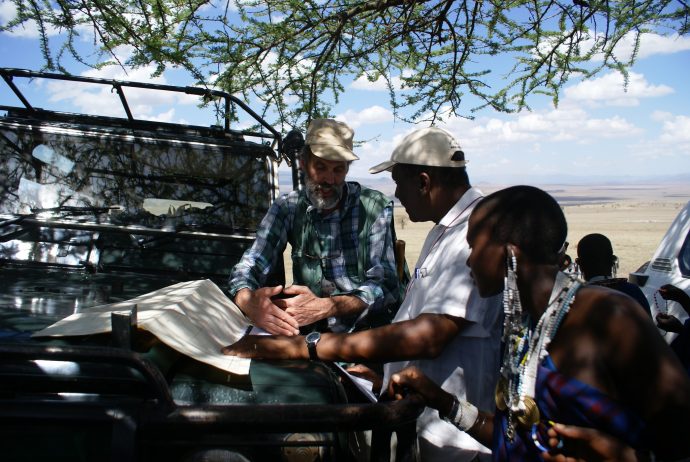 Working side-by-side with local scientists helps VDAP further its unofficial mission: Make connections and build relationships worldwide, which are integral to the work we do. It’s what we like to call science diplomacy.

It has been nearly eight years since that incredible experience, and I continue to work as the liaison between USGS and USAID, and to focus on reducing the risk from geological hazards, including evaluating the risk from volcanoes.

One thing has changed however. Now I am a mother to two young children. I hope I get the opportunity to take them to Tanzania to see my favorite volcano someday and meet the amazing scientists who deal with its threats.

Gari Mayberry is a Geoscience Advisor for USAID’s Office of U.S. Foreign Disaster Assistance, on loan from the U.S. Geological Survey