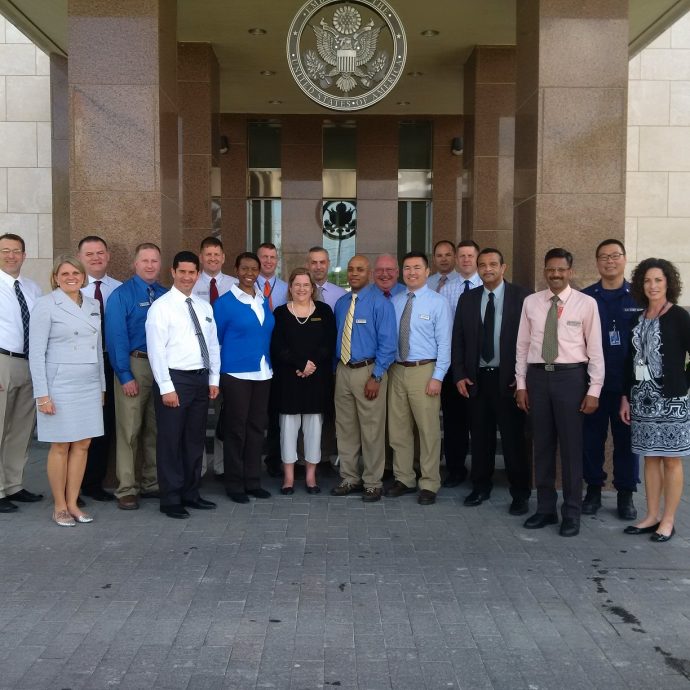 An international development class at the U.S. Embassy in Port-au-Prince. (Mark White / USAID)

Benjamin Franklin once said, “Tell me and I forget, teach me and I may remember, involve me and I learn.”

Those were my exact sentiments when I escorted 16 graduate students from the U.S. Army War College to Port-au-Prince, Haiti , earlier this year. These students had signed up for an international development class under the Peacekeeping and Stability Operations Institute (PKSOI) at the War College, a course I lead as USAID’s assigned faculty to the college. This trip allowed these students an opportunity to witness on-the-ground, whole-of-government coordination to rebuild the lives of Haitian families affected by the 2010 earthquake.

Why Haiti? The United States has supported the strengthening of democracy in Haiti for several decades. Even prior to the earthquake, Haiti faced a variety of challenges, including being the poorest country in the Western Hemisphere.

The country is a priority for the U.S. Government and other donor nations following the 2010 earthquake that shattered economic stability in the country. To aid those affected by the quake, the United States committed $4.2 billion in assistance to help Haiti transition from disaster relief to a long-term development plan. Key advancements have been made in such areas as health services, economic growth, and investments in the agriculture sector.

Yet much of Haiti remains fragile and gains in some areas have been difficult to sustain. Obstacles to Haiti’s progress include lack of government capacity and vulnerability to natural disasters as well as challenges related to Haitians’ access to many basic services.

Haiti is one of the most illustrative examples of the possibilities and challenges of development assistance. I took my students to Haiti because I wanted them to see where and how international assistance makes positive impacts. The trip also encouraged dialogue among the students and with the people of Haiti so we could together discuss areas where assistance efforts could be improved.

“The trip brought international development to life. It took the learning from the classroom into a multidimensional opportunity to see defense, diplomacy and development in action,” said Rebecca VanNess, a student in my class.

USAID partners with Department of Defense (DOD) academic institutions, such as PKSOI, to educate DOD staff on USAID’s mission and to encourage open dialogue on how best we can work together to build a more secure and peaceful world. The international development course at PKSOI is part of USAID’s long-term training program that sends USAID staff to DOD academic institutions to foster mutual learning between the two agencies.

“For the first time, I understood why the Army spends its time and money to send its best senior leaders to the War College. Haiti provides a microcosm of all the facets of the [international development course] curriculum,” said Kim Colton of USAID.

I am a firm believer that learning through immersion is one of the greatest tools we can use when educating students about a place with a different culture and language than our own. My goal for organizing the trip was to allow students to get out of their comfort zones, to take what they have learned in an academic setting and see the realities in Haiti, and to come up with plausible solutions that incorporate a development perspective.

During the visit, the students had a chance to meet with representatives of local NGOs and members of the United Nations Stabilization Mission in Haiti (MINUSTAH). The students also participated in discussions at the U.S. Embassy in Port-au-Prince with U.S. Ambassador Peter F. Mulrean, who offered frank discussions on the complexities of working in Haiti.

I was honored to have Professor Grace Stettenbauer, a senior Foreign Service Officer from the Department of State, accompany the class to Haiti. Stettenbauer shared her perspectives on applications of the U.S. national security policy and strategy to the real-world situations students encountered in Haiti.

My students departed Haiti feeling optimistic about its future, agreeing with the commonly repeated expression  that “Haiti is too rich (in resources) to be considered poor.”

Mark White was the former deputy mission director of USAID/Haiti and is currently assigned as the USAID representative and professor at the Peacekeeping & Stability Operations Institute at the U.S. Army War College.

« Family Planning for the World’s Youth Promotes Peace, Health and Prosperity
A Behind-the-Scenes Look at What It Takes to Deploy with the World’s Only International Volcano Response Team »
Categories: Disaster Relief · Latin America and the Caribbean · USAID