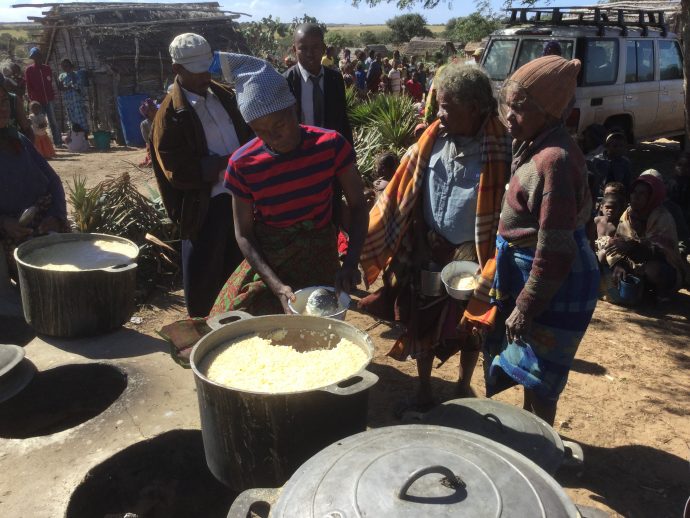 With support from Catholic Relief Services, Sisters of Charity provide hot meals to the elderly and children in Tshiombe. / Christopher LaFargue, USAID

Because of its slow onset, Southern Africa’s drought may not be headline news. But its impacts are being felt by millions. At least 12.8 million people in Southern Africa will face crisis levels of food insecurity by the end of this year.

Madagascar has been especially hard hit. About 80 percent of the population in the country’s seven southern districts—665,000 people—are in need of emergency food assistance.

I recently traveled to Madagascar with U.S. Ambassador to the United Nations Agencies for Food and Agriculture David Lane. There we met with communities struggling to find enough to eat after three years of consecutive drought made worse by El Niño. 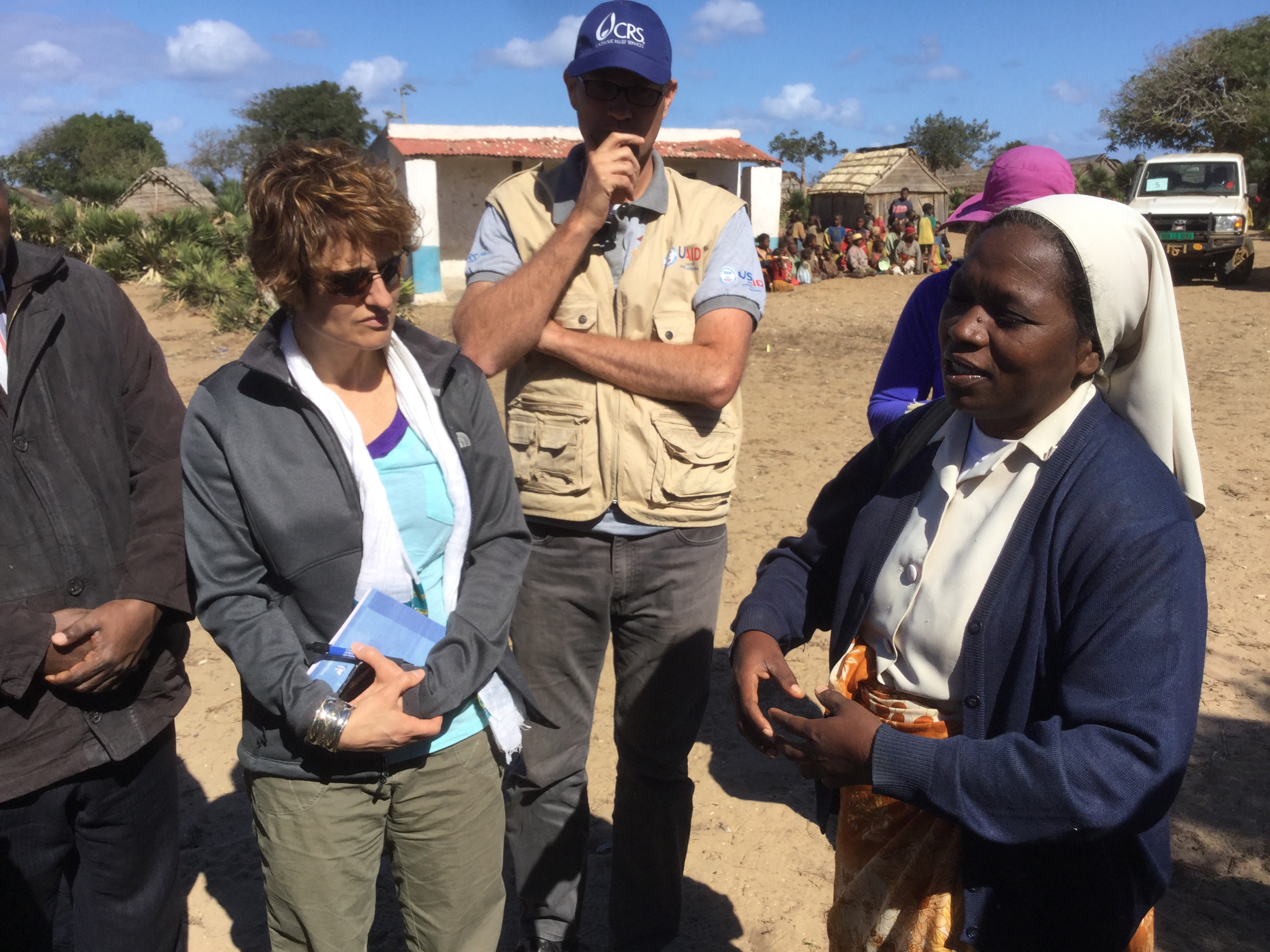 Soeur Josiane from Sisters of Charity speaks to Dina Esposito about the soup kitchen in Tshiombe. / Christopher LaFargue, USAID

During our trip, we saw visibly malnourished children and adults, including many elderly. In Tshiombe, we spoke with Soeur Immaculata, a nun from Sisters of Charity, who opened up an emergency soup kitchen to provide regular hot meals to children and the elderly. She told us she had not seen so much suffering since the severe droughts of 1992 and 2006.

We also visited Ankilimafaitsy Primary School in Ambovombe, where the U.N. World Food Program is providing children with lunch as part of a school lunch program that feeds almost 300,000 Malagasy children daily. For most of these children, this school lunch is the only food assistance they receive; it has become a vital lifeline in these communities as parents struggle to put food on the table.

Here are three steps we—and other donors—must take to help the people of Madagascar during this “silent,” but devastating emergency: 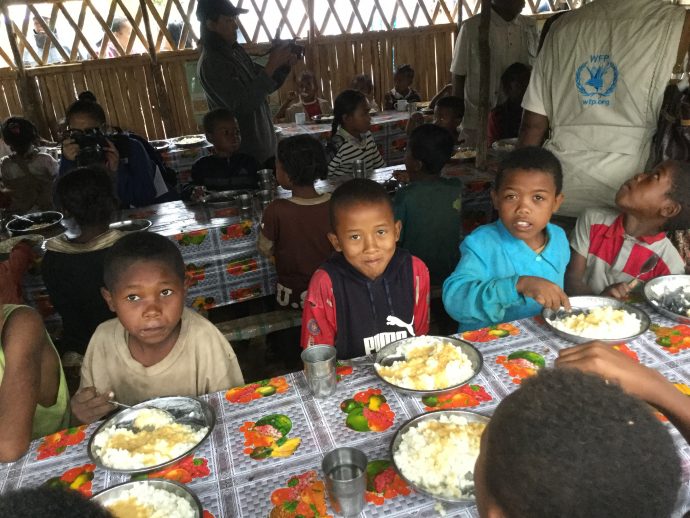 During my trip, we announced an additional $8 million in food assistance to the Malagasy people, bringing the United States’ total El Niño response in Madagascar to $17 million. But we must work with the government and the donor community to coordinate our assistance. We encourage Madagascar’s national and local officials to assess immediate needs, more proactively mobilize their own response, and more effectively draw global attention to the crisis, mobilize contributions, and facilitate donor planning. 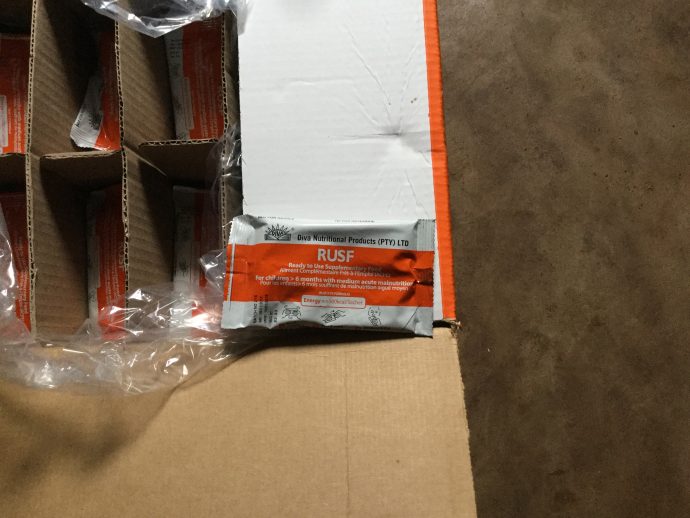 2. Plan early for a scaled up emergency and recovery response

As in the ongoing Ethiopia drought response, early warning is the key to early response. Forecasts indicate that Madagascar’s lean season could begin as early as August rather than October. Children under 5 in this area have unusually high rates of malnutrition. It is urgent that we complement expanded food assistance for families in these southern districts with specialized foods to prevent and treat malnutrition.

I was particularly impressed by Madagascar’s National Office of Nutrition and its efforts to screen and treat cases of moderate acute malnutrition. We met with well-trained volunteers who were educating young mothers about nutrition. With USAID support, children are being provided with ready-to-use supplementary food. Sustained assistance will be critical in the months ahead to prevent children from sliding into the more serious condition of severe acute malnutrition.

Equally important will be ensuring that families can grow their own food in the next cropping season. A seed distribution plan must get seeds in the hands of farmers by September. 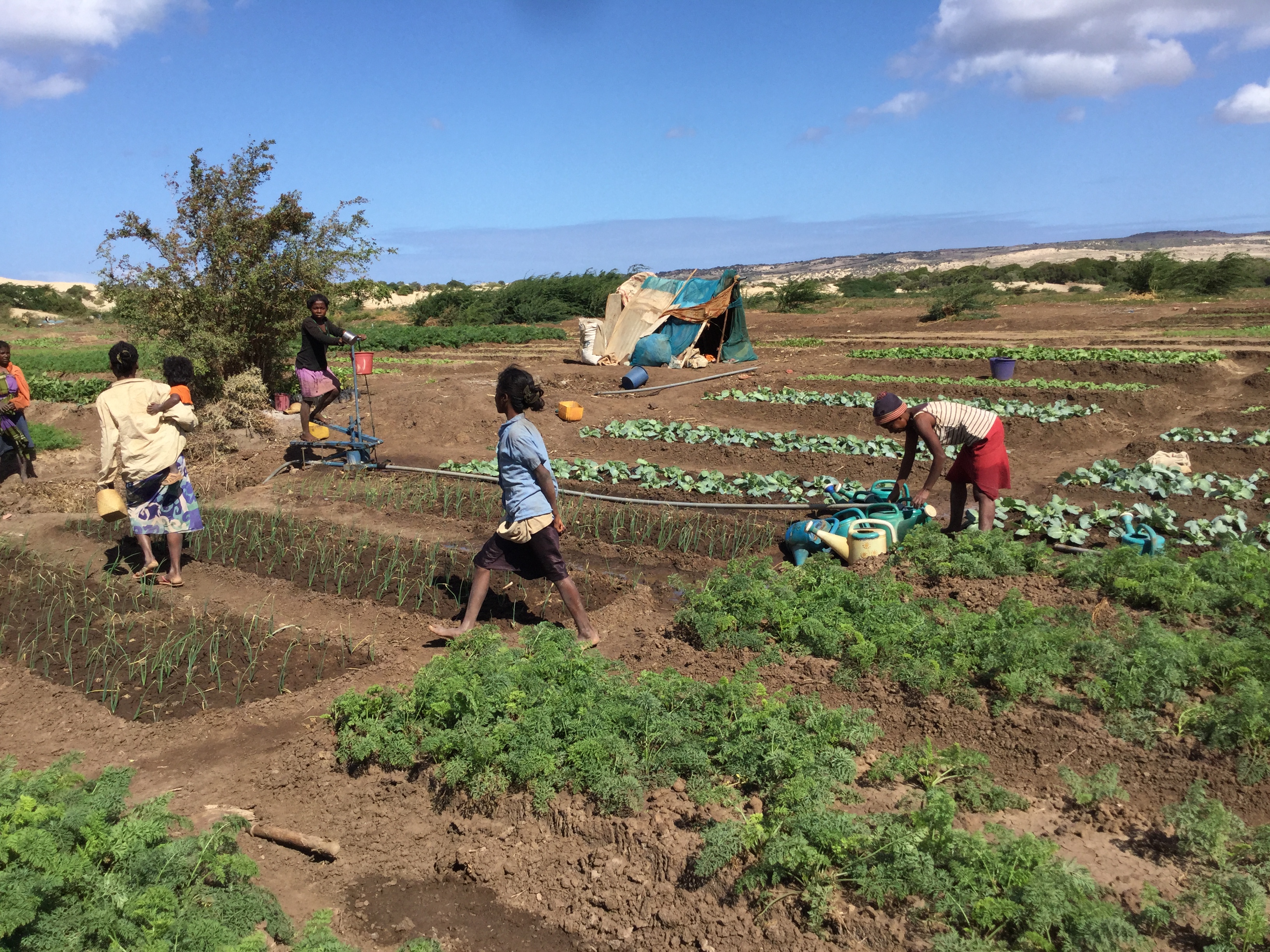 3. Continue to invest in resilience

Although the current drought is outpacing the ability of many Malagasy farmers to cope, some farmers have remained self-reliant with our investments. Some of our disaster mitigation efforts include working with farmers to grow more drought-resistant crops like sweet potato and cassava. We are also helping farmers to build assets, access more land near water sources, and improve nearby water points for humans and cattle. Voucher programs help fishermen buy tools and other resources during this drought.

Under a creative arrangement, local farmers are growing corn on large-scale plantations, between rows of sisal (a plant used to make rope and rugs), in exchange for keeping the fields cleared and tended. The farmers keep one-third of what they grow to sell or eat, they reserve a third for seeds for the next season, and another third is sold to the World Food Program for its school lunch program.

The program has especially benefitted women farmers, one of whom told me, “We used to have to take our children out of school when they turned 15. Now they can stay on into high school. Our girls no longer have to ask men for money to buy soap [a local euphemism for prostitution].”

These efforts are making a clear difference as communities cope with drought. We must continue to scale up these investments—and help expand opportunities for populations to make a living during both good and bad times.

The people of Madagascar will inevitably face future climate shocks in addition to the current drought. We can help them to mobilize, plan and build resilience to those shocks to promote security and avert emergencies.