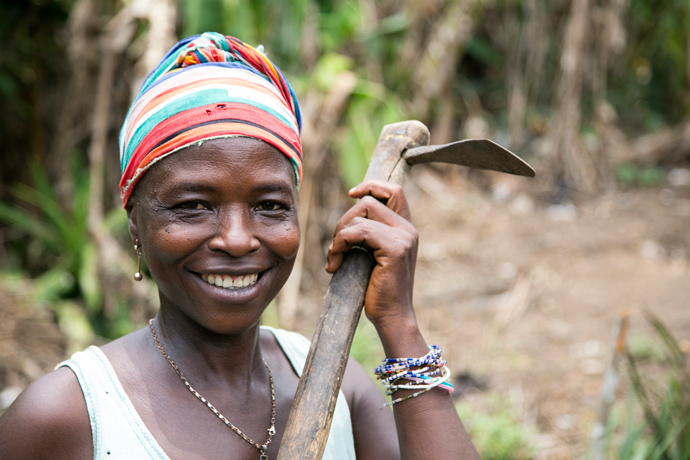 Fudia Lansana is back at work on her farm in Sierra Leone after the Ebola outbreak kept her home without food for her family. / Michael Stulman, CRS

Fudia Lansana once felt that nothing could be as terrifying as becoming one of more than 14,000 people infected with Ebola in Sierra Leone. But as her household of nine went from eating three meals a day to two, and then from two to one, Fudia realized she was facing something just as scary: hunger.

Under normal circumstances, Fudia would walk a few miles from her village to work on her farm with friends and family, but these were far from normal times. The government—in an effort to stop the spread of Ebola—restricted movement and prohibited public gatherings. 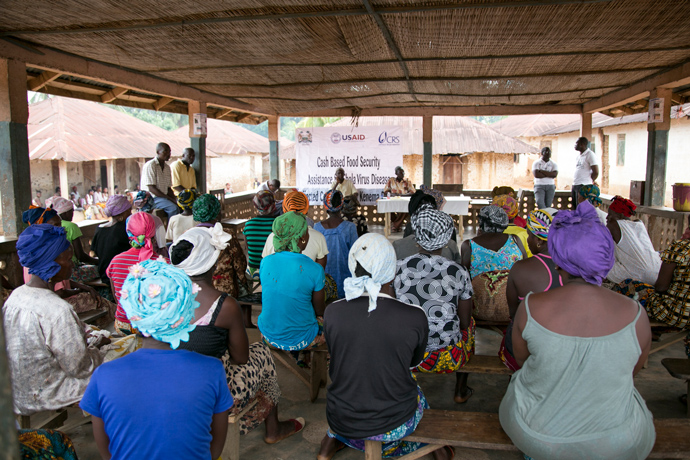 “Farming is our source of survival, but things were locked down during the Ebola era,” says Fudia. “We couldn’t reach the farm, so having enough food was very difficult.”

Fudia survived for months on savings and borrowed money. But even now that the Ebola outbreak is over, she and other farmers still feel its effects. Their farms are overwhelmed by weeds after months of neglect. It will be a while before they can prepare the land, plant new crops and collect the harvest to replenish their depleted food stocks.

Immediate relief has come in the form of cash transfers distributed by Catholic Relief Services with support from USAID’s Office of Food for Peace. The monthly $30 distributions target nearly 24,000 people in Kenema district, which has one of the highest rates of extreme poverty and chronic malnutrition in Sierra Leone.

The cash distributions are a bridge to get farmers over the next 10 months. They help farmers make ends meet until markets and food production recover and income-earning opportunities increase.

Before the Ebola outbreak, Sierra Leone was still feeling the effects of a brutal decade-long civil war that ended in 2002. More than 60 percent of the population lived on less than $1.25 a day, according to the United Nations Development Program, and life expectancy was 48.

“Life was difficult then too,” says Battu Koroma, the breadwinner for her household of eight. “Since I lost my husband during the war, things were hard. But then during the outbreak, I could not farm or visit my family. I would take loans from people. I would give away my clothes just for a cup of rice.”

“If you didn’t have money saved, you couldn’t afford to buy food,” explains Fudia. “During the Ebola outbreak, I was surviving on plain rice.” 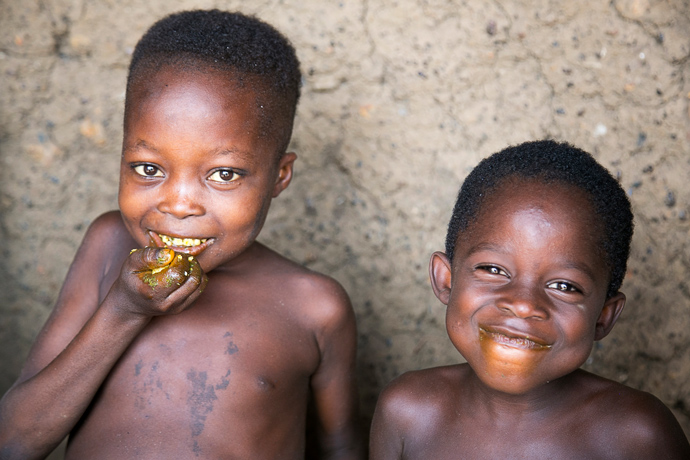 Children from over 4,000 vulnerable families could eat three healthy meals a day after their parents used cash transfers from Catholic Relief Services to invest in their farms and buy food. / Michael Stulman, CRS

She buys the rice, fish and fruit at markets in her village. Fudia and others who received cash distributions were encouraged to buy locally produced food, which ensures the money supports local merchants and stays in the community. This helps local markets to recover from the shock of Ebola and helps community-based food producers and buyers to get back on their feet.

“Everyone is benefitting from this, including local businesses,” Fudia says. “When the money isn’t there in the community, businesses can’t sell, so they don’t make money.”

Cash distributions also mean people have the flexibility to purchase what’s most important for their family. For example, they are able to buy a variety of nutritious foods at the market or seeds to restart their farm.

Fudia chose to invest her first $30 installment in her farm.

“I have been able to hire people to help prepare my land for planting seeds and to increase the size,” she says. “This will change our lives.”

Fudia also likes the educational components of the food assistance program. “I’ve learned about nutrition and health care,” she says. “I can take care of my family, improve my farm and eat well.”

Like Catholic Relief Services’s work in more than 100 countries around the world, supporting families like Fudia’s is helping improve and advance human life.

“Food brings life,” she says. “And with this money, I’m getting more life.”

USAID, through its Food for Peace program, partners with seven NGOs, including Catholic Relief Services, across Liberia, Guinea and Sierra Leone to address acute food insecurity. The program uses a cash-based approach that restores household purchasing power, promotes the recovery of market function and trade, and supports agricultural production.

Since the onset of the Ebola crisis in 2014, Food for Peace has reached more than 1.3 million people with emergency food assistance. The program continues to help thousands of families like Fudia’s to meet their food needs, while simultaneously helping local food producers, markets and countries recover from the food security impacts of Ebola.

Michael Stulman is the regional information officer for West and Central Africa at Catholic Relief Services (CRS).  Follow him @MichaelStulman