Although nearly half of the world’s population now has water piped into their homes and there have been significant improvements to water access in recent decades, many people living in urban areas of developing countries still do not have easy access to this most basic resource. And even where pipes do reach the urban poor, water sometimes does not. 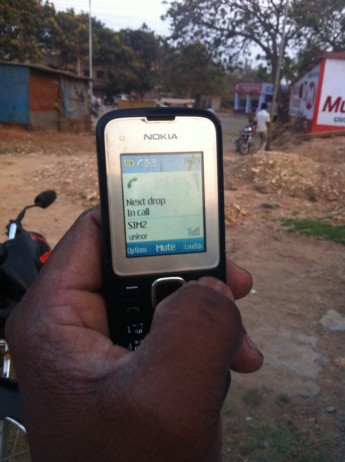 NextDrop’s real-time data and messaging system uses SMS to inform subscribers about when they’ll be receiving water, when there’s a delay, when pipe damage is likely to affect them, and when someone in the community has updates to share. / NextDrop

Sridharan created the phone-based program NextDrop to notify people when water will be available. In 2010, NextDrop won the Big Ideas@Berkeley contest, allowing Sridharan — a University of California-Berkeley civil engineering graduate — and her team of fellow UC Berkeley graduates to begin acting on their vision.

The service has reached 75,000 registered users in Bangalore, India. Now, the Development Impact Lab at Berkeley, with USAID funding from the U.S. Global Development Lab’s Higher Education Solutions Network, is evaluating the effects of the text message-based notification system. The evaluation has reached 1,500 households so far.

This May, Big Ideas celebrates its 10 year anniversary at UC Berkeley. Since its founding in 2006, the year-long contest has provided funding, support and encouragement to interdisciplinary teams of students who have innovative solutions for addressing global challenges.

Big Ideas is an example of how a university can be a catalyst for high-impact social innovation and research in international development, helping achieve an end to extreme poverty. The story of Big Ideas winner NextDrop demonstrates how a project that began on a college campus is now building evidence to reach scale. 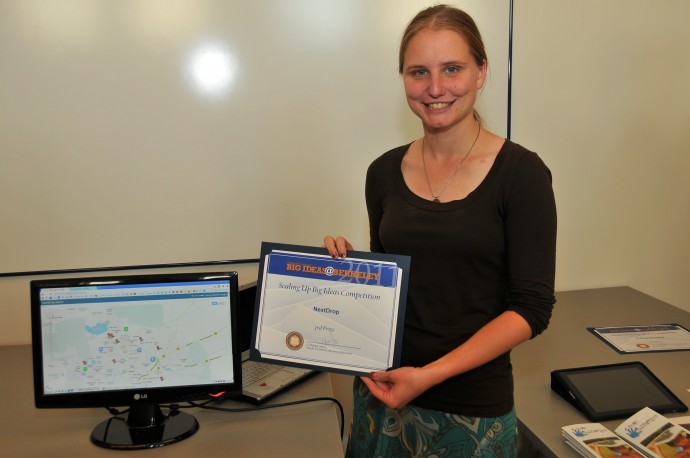 Emily Kumpel, representing the NextDrop team, accepts an award in 2011 to scale up the team’s pilot study in Hubli-Dharwad. / Big Ideas Contest

From Classroom Idea to Reality

The seed funding that Sridharan and her team won from the Big Ideas Contest helped them to develop their simple but innovative idea: using text messages and crowd-sourced information to alert residents one hour before water will be heading down municipal pipes and into their homes.

This allows households not only to have accurate and timely information but also enables water utilities to access real-time information about the status of their systems.

The student team partnered with an NGO in Hubli, India for a pilot study of 200 households. Preliminary results were positive and the group was able to continue and refine their technology.

With funding from the Gates Foundation, the Clinton Global Initiative University, and the Knight Foundation, they began scaling their services beyond Hubli to the Indian cities of Bangalore and Mysore.

Building an Evidence Base for Scale

The evaluation of the rollout of NextDrop’s services will demonstrate whether receiving text message notifications of when water is flowing improves a family’s quality of life, so they don’t have to spend as much time waiting — time that could’ve been spent working or at school. 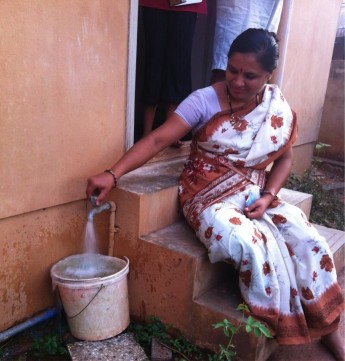 The research team is also using survey data from the household impact evaluation to assess the accuracy of valvemen reports to NextDrop. The end goal is to provide NextDrop and the utility with a low-cost system for verifying and adjusting data provided by the valvemen, so that the utility has more accurate information about water flows to be able to manage limited water supplies.

If NextDrop’s services are shown to be valuable in Bangalore, they will be able to scale their approach across other major cities in developing countries.

From early stage funding and support through the Big Ideas contest to evidence-based decision making and scale-up through the Development Impact Lab, projects like NextDrop have shown how the university has become a powerful space for inspiring, launching, developing and scaling big ideas.

As Phillip Denny, director of Big Ideas shares, “University-based programs like Big Ideas provide the perfect ecosystem for early-stage entrepreneurs by providing the resources, funding and ultimately the validation that allows ideas like NextDrop to thrive.”

Anh-Thi Le is the Program Coordinator at Blum Center for Developing Economies at the University of California-Berkeley. Follow her @_AnhThi.