How Partnership is Combating Deforestation in the Amazon 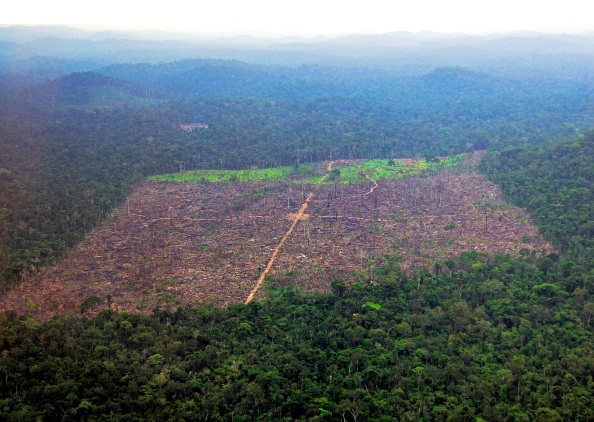 An aerial photograph shows a tract of the Amazon jungle recently cleared by loggers and farmers in Pará State. Imazon is primarily based out of Para and has worked to reduce illegal deforestation by 80 percent. / Stian Bergeland/Rainforest Foundation Norway/Reuters

As a nation that claims more than two thirds of the Amazon rainforest, Brazil will be a key player in the negotiations at the United Nations Climate Change Conference this week. In fact, representatives from Brazil are expected to present a national proposal for fighting climate change—with a goal of reducing deforestation further from the 80 percent drop seen between 2004 and 2014.

About 17 percent of the Amazon has already been lost to deforestation. The loss of forest cover causes dramatic changes in rainfall distribution, disrupts the global carbon cycle and intensifies global warming effects, with grave consequences for both people and biodiversity.

For the team at Imazon, an 80 percent drop is not enough. 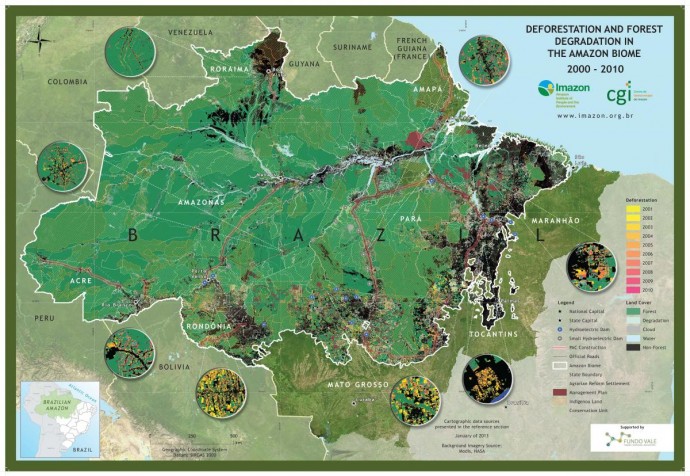 The map shows deforestation and degradation in the Amazon rainforest. The State of Paráa has experienced some of the heaviest rates of deforestation in Brazil. / Imazon

Imazon, a nonprofit research institute funded by the Innovation Investment Alliance—a partnership between USAID and the Skoll Foundation, in collaboration with Mercy Corps, that helps promising social enterprises reach scale—is taking the challenge a step further, with a goal to end deforestation entirely within the next decade.

Given that Brazil is still losing around 5,000 square kilometers of forest  a year, anything less is a failure to do what is necessary, feasible and advantageous.

Based in Belém, Brazil, Imazon is at the forefront of a campaign to raise awareness about the loss of the Amazon. It uses satellite mapping technology to provide a true picture of deforestation on the ground and to monitor the situation with real-time data. The information is provided to the Brazilian government and local landowners. Imazon’s growing body of data and research is playing an ever-larger role in influencing political and land ownership decisions in favor of sustainability.

For example, Imazon’s Rural Landowner Registry, or CAR (Cadastro Ambiental Rural), is a system that requires all rural properties to be mapped and registered through the Brazilian government. In addition to providing important data regarding land use and deforestation rates, CAR allows landowners and municipalities to formalize which parcels of land are actually theirs, thus keeping in check those who may be clearing forest illegally.

The program has been a huge success. In the Paragominas municipality of Pará, a state infamous for rapid forest loss and corruption, Imazon was able to help reduce illegal deforestation by more than 80 percent.

Today, with support from the Innovation Investment Alliance, Imazon is expanding its programs to 50 municipalities throughout Pará, with a goal to reduce the rate of deforestation while supporting economic growth based on a foundation of legally held land use.

Imazon is also working to take its approach beyond Brazil’s borders, to share its pioneering maps with the global community. The launch of Google Earth Engine—an online global environmental monitoring platform with more than 40 years of historic measurements—has allowed Imazon to connect with leading organizations throughout the world that want to build on the organization’s model.

Brazil’s new environmental plan is promising, but Imazon’s team sees that more can be done. While hopeful that Brazil is moving in the right direction, the ultimate goal of ending deforestation will require solid planning from Brazil’s leaders alongside the technical know-how of organizations like Imazon. Together, they can build the connections that create positive change for people and the planet.

Kathleen Hunt is a Senior Partnership Advisor in Center for Transformational Partnerships in the Global Development Lab. She works on issues related to social entrepreneurship and women’s economic empowerment.

« From the Household Hearth to Global Health: Creating a Healthier Planet Starts with a Cookstove
What We See in Lebanon and Jordan »
Categories: Environment · Latin America and the Caribbean · USAID