Strong Border Management is Vital to the Fight against Ebola 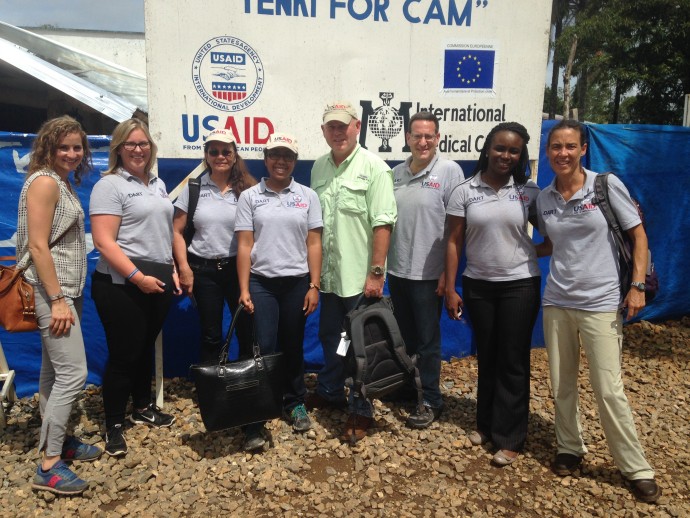 Diseases don’t stop at international borders, which is why the ongoing fight against Ebola in West Africa has taken a special focus on border management.

We’ve worked vigilantly to control the spread of the disease — marking victories along the way with success stories of survivors and periods during which countries were completely Ebola-free — but we can’t let our guard down. Merchants, farmers and migrant workers continue to use formal and informal border crossings to travel between countries, leaving a real risk that Ebola can still spread across countries.

Members of USAID’s Ebola Disaster Assistance Response Team recently met near the border of Guinea and Sierra Leone, where thousands of travelers cross every day. We witnessed a scene that’s standard at any international border: People streamed back and forth between Forécariah, Guinea, and Kambia, Sierra Leone to sell goods, transport cargo and visit friends and family.

But one thing was different: Before making the crossing, each person lined up to have their temperature checked and to wash their hands — standard protocols now in place in the West African countries impacted by the Ebola outbreak.

Practices like handwashing and temperature checks at international borders are critical for the continued fight against Ebola. Border management has been a key part of USAID’s response to the outbreak. / International Organization for Migration

This is such a critical component to the response. Ebola has killed more than 11,000 people in the region since 2014, and the fight against the disease isn’t over. Just last week, three new cases were reported in Liberia, highlighting the importance of maintaining vigilance.

Our partner, the International Organization for Migration (IOM), has worked with the governments of the affected countries to strengthen health screenings at this and other land border crossings, as well as the airport and seaports in Sierra Leone’s capital. IOM is helping teach travelers about the importance of handwashing, and is also collecting data about migrants crossing the border. This data can be a valuable tool for disease surveillance, contact tracing and deployment of personnel.

These steps are making a big impact. At some border crossings, health screenings have been transformed from something most travelers skipped to a comprehensive process that screens every traveler. At Guinea’s international border crossing at Gbalamuya, for example, 25 IOM staff members are now working around the clock to make this happen.

In Liberia, USAID is working with NGO partners to build screening and triage stations at the border with Sierra Leone. The stations are equipped with handwashing stations, a temperature screening booth, and holding rooms for suspected cases; there’s also a disinfection team and on-call ambulance to transport suspected cases.

Vigilance isn’t just a responsibility for governments. We are also supporting community awareness and engagement activities so that border communities — including those areas where there is no official border post but people cross informally — are better able to identify Ebola symptoms and refer suspected cases to the proper health authorities.

These border management steps, along with USAID’s continued work across West Africa, will help national governments and local communities in this region better respond to any new outbreaks and ultimately work toward a common goal: saving lives now and in the future.

« 16 Days: Making Schools Safe Everywhere For Students Anywhere
How and Why USAID is Ensuring Our Development Efforts are Climate Resilient »
Categories: USAID