Back in the Classroom: Displaced Students in Nigeria Find Education & Hope 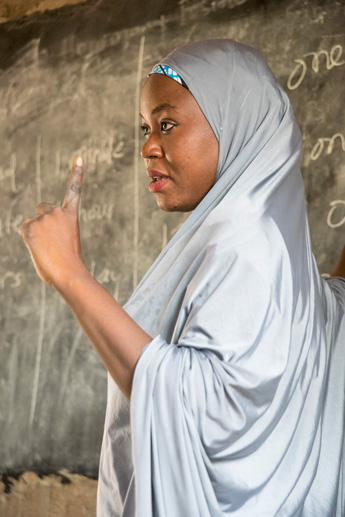 Like most 10-year-old students, Dinah solves her math problems in the old-fashioned way—with her fingers. She counts to six and jots down the number.

For Dinah’s extended family, they are counting something entirely different—the months since the girl lost her mother during a raid by Boko Haram insurgents on her village in northern Nigeria.

After the vicious attack, the young girl eventually made it to a center for internally displaced persons. Dinah’s uncle drove from the city of Bauchi to bring her to his home.

Today, some seven months after the incident, Dinah is adjusting to a new school and a new future.

An insurgency has wreaked havoc on parts of Nigeria, forcing some 2.2 million people from their homes—one of the largest concentrations of internally displaced persons in Africa. Hundreds of thousands of school-aged children have been set adrift inside the country, ripped from their communities and their schools.

With the magnitude of the situation, USAID, state officials and NGOs stepped in with the Education Crisis Response program.

Launched in 2014, the goal of the program is to expand access to quality and protective non-formal education and alternative education opportunities for out-of-school children, ages 6 to 17, in three Nigerian states and reduce the burden on local schools already stretched thin by limited resources. It is implemented by Creative Associates International and the International Rescue Committee, along with local NGOs.

Local facilitators identified and trained by the program use a government-approved curriculum to teach basic literacy, numeracy and life skills. The learning centers are housed in existing structures like schools or meeting houses that are made available by the local community.

The students attend class three days a week for at least two hours each day and are provided basic school materials. 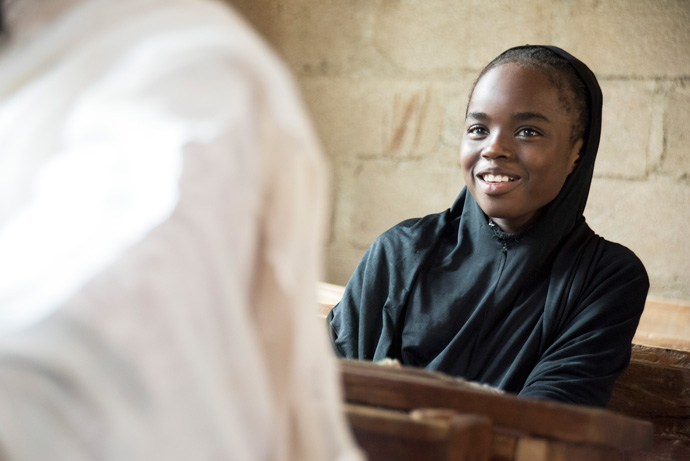 Adolescent girls in a non-formal education class on Sept. 21 at a school in Yola, capital of the state of Adamawa in Nigeria. Creative is implementing USAID’s Education Crisis Response program here through partner agency International Rescue Committee to assist youth displaced by Boko Haram. / David Snyder for USAID

Paving the way for mainstream education

“The type of education they do receive is a good one,” says Halilu Usman Rishi of Bauchi’s State Education Secretariat. “That is going to [pave the] way for them to mainstream to a formal system of education.”

The opportunity to return to class is life changing, especially for the many who have been displaced and out of school for years.

“For the kids who had forgotten most of what they have learned [and are] now coming back to a classroom — to say it is therapeutic is an understatement,” Oladini said. “It’s a thing of joy.” 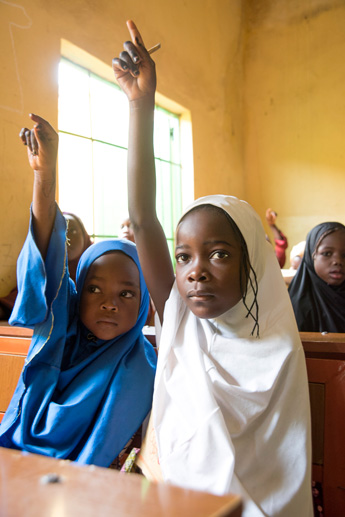 And while education is the foundation of the program, children traumatized by conflict and upheaval can only learn when their fears are also addressed.

USAID responded to the psychological needs of the displaced children by incorporating a psychosocial approach to teaching. Facilitators are trained to teach in a student-friendly manner by incorporating group exercises and encouraging positive, interactive student-teacher relations. Working through local partner agencies, the program also encourages the local community to spread messages of peace.

Officials in Bauchi are embracing this strategy to help students deal with what has happened to them and their families.

“The program is, in fact, doing as much as possible to ensure that the children are associating with their friends in the learning centers,” says Bauchi’s Rishi. “Some of them used to tell us as we go around to discuss with them, that initially, they found it very difficult to associate with the other children. But as they interact so much with their friends in the learning centers, they forget thinking about such ugly happenings.”

Scheduled to phase out in 2017, the Education Crisis Response program is supported by Nigeria’s state and federal governments, which, Oladini said, will help ensure the long-term sustainability of the program.

From the outset, government education officials have been involved in every detail of program planning and worked with the program to identify communities, develop a teacher training manual and sit in on classes.

For every learning center, Education Crisis Response has also trained two local government education officials to serve as mentor teachers whose job is to work with the facilitators and provide feedback to teachers.

“From day one, we made sure [the government understood] that this is your program, it’s not our program,” Oladini said. “So from year one before the end of year two, they’ll be able to plan within their budget to see how they can scale up all these programs.”

And while government’s support of the Education Crisis Response program is essential, it is one part of an overall effort that also depends largely on the communities themselves.

“We’re letting them know that with or without parents, there is what we call ‘your own mindset’ – your own ability to move forward and persevere in a state of difficulty,” Oladini said. “This is what we are teaching them.”

Produced for USAID by Creative Associates International, with reporting by Michael J. Zamba and Ernest Akoma in Nigeria.

« Cote d’Ivoire Election to Mark Turning Point After Years of Healing From Conflict
What Does Water, Sanitation and Hygiene Have to Do With Nutrition? Everything. »
Categories: Education and Universities · USAID · Women · Youth