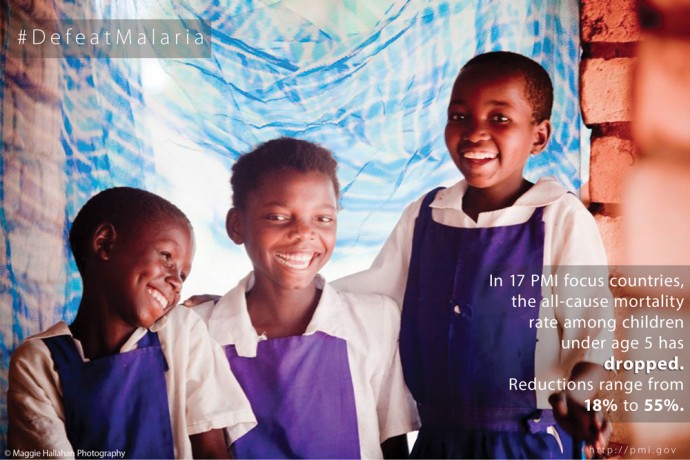 This year’s Nobel laureates in medicine developed therapies that revolutionized the treatment of some of the most devastating diseases caused by parasites.

On Monday, William Campbell and Satoshi Ōmura were cited for their discovery of the drug Avermectin, the derivatives of which have radically lowered the incidence of river blindness and elephantiasis. And Youyou Tu was rewarded for her research on malaria therapy. USAID relies on these medicines to protect millions of people at risk.

Parasitic worms afflict one-third of the world’s population, causing diseases like river blindness and elephantiasis. Before the development and widespread use of the avermectin-derivative ivermectin, river blindness left whole communities in Africa blind from the disease. Adults would be led around by children holding a stick. Agricultural productivity and development were at a standstill. Decades later, these communities are thriving agricultural centers, and children are in school instead of caring for the blind. 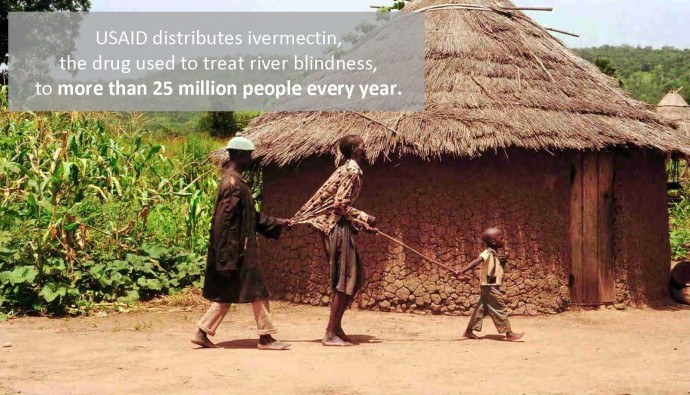 A child leads two individuals blinded by the parasite that causes river blindness through a village. / Bill VanderDecker

USAID’s neglected tropical diseases (NTD) program targets both river blindness and elephantiasis, as well as other diseases. Each year we distribute ivermectin, the drug used to treat river blindness, to more than 25 million people.

Since 2006, USAID has supported the delivery of more than 1 billion preventive drug treatments for NTDs – to almost a half a billion people. The neglected diseases team also manages the largest public-private partnership in USAID’s history, having secured more than $8 billion in drug donations to date. We estimate that for every tax dollar spent by USAID, more than $26 in drugs is donated in-country.

Inspired by a description in a 1,700-year-old Chinese text of the use of sweet wormwood to combat fever, it was Tu who discovered artemisinin. ​This medicine remains the most effective treatment for malaria today, saving millions of lives.

The parasite responsible for the most lethal human malaria started to resist the drug chloroquine in South America and Southeast Asia in the late 1950s and early 1960s. By the late 1960s, efforts to eradicate malaria had failed and the disease was on the rise.

At that time, Tu turned to traditional herbal medicine to find novel malaria therapies. In China, the qinghaosu plant was used in fever remedies for thousands of years. Tu examined 2,000 recipes for traditional Chinese remedies and discovered one derived from sweet wormwood (Artemisia annua) reduced malaria parasites in the blood.

USAID has been fighting malaria since the 1950s, helping develop the tools relied on today. For example, USAID funded trials showing that mosquito nets, treated with safe insecticide, were effective in significantly reducing child deaths and preventing malaria in pregnancy. 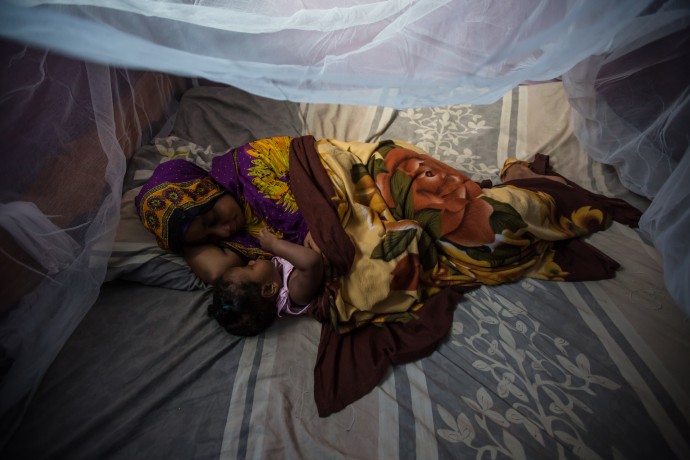 Habiba Suleiman, 29, a district malaria surveillance officer in Zanzibar, naps with her little girl Rahma under a mosquito net. She lives in Tanzania, where up to 80,000 people die from malaria each year. Hariba is working to change that. Read her story on USAID’s storytelling hub. / Morgana Wingard, USAID

Through PMI, USAID funds operational research to improve uptake and scale of interventions, to preserve intervention effectiveness in the face of both drug and insecticide resistance, and to respond to changes in malaria epidemiology.

More than 6 million deaths have been averted, primarily among children under 5 in sub-Saharan Africa through the expansion of malaria control efforts by affected countries — with the support of PMI and other key partners.

This success would not have been achieved without access to high quality malaria treatments, diagnostics, and tools like bed nets and indoor spraying to kill or repel malaria carrying mosquitoes. Since the initiative began, PMI has purchased more than 318 million quality-assured artemisinin combination therapies, as well as more than 174 million rapid diagnostic tests to support appropriate malaria case management.

The financial and technical contributions of the U.S. Government are a major catalyst in the remarkable progress that has been achieved in many countries to reduce the devastating burden of parasitic worms and malaria. But the work is far from complete.

More than 1 billion people suffer from one or more NTDs. Almost all are poor who live in rural areas and urban slums of low-income countries. Nearly half a million people still die each year from malaria. When children fall ill, students miss school, and adults stop working and are unable to provide for their families.

We admire Campbell, Ōmura and Tu for their inspiration and celebrate their discoveries that helped mankind.

Chris Thomas is a communications advisor in the Bureau for Global Health.