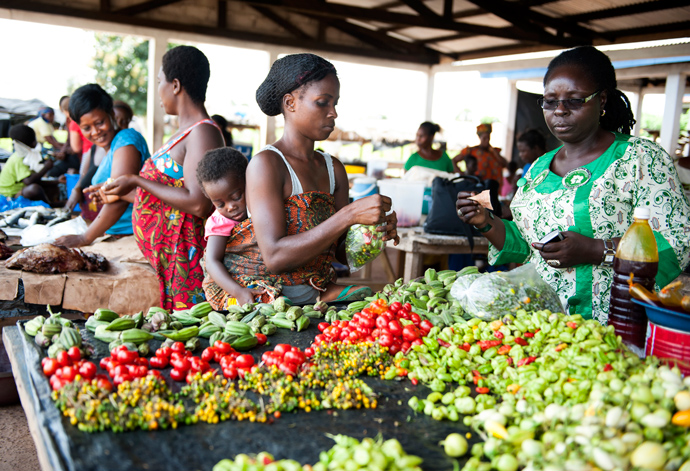 Women sell their goods at a market in Duékoué, Côte d’Ivoire, on Sept. 30. USAID’s Office of Transition Initiatives helped strengthen dialogue and positive interaction between the market women after tensions between their different ethnic communities led them to minimally engage with each other. / Kendra Helmer, USAID

Today in Côte d’Ivoire, three in four people are under 35 years old, and many can’t find work.

After the last presidential election in 2010, violence erupted across this West African country. An estimated 3,000 people were killed, and hundreds of thousands were displaced. The youth were largely the instigators and victims of the violence, frustrated that neither presidential candidate would concede defeat.

For the young, the unemployed and discontent, elections matter.

Their vote in the upcoming presidential election Oct. 25 represents a new opportunity to participate peacefully in choosing the next leader. And a peaceful election can help ensure that economic growth and the promise of more jobs is realized.

I moved to Côte d’Ivoire to support post-conflict reconciliation through a program with USAID’s Office of Transition Initiatives. Over the past three years, I’ve seen how communities have addressed the trauma and reconciliation has begun to take hold.

Côte d’Ivoire has a history of military coups, counter coups and political assassinations. For many years, the government provided few public services. In many areas, administrative clerks did not issue birth certificates or national identification cards, courts failed to punish criminals, and police officers could not guarantee safety and security on the streets.

After the 2010 post-election violence, President Gbagbo was captured and transferred to the International Criminal Court to stand trial for war crimes. His challenger, Alassane Ouattara, became the new president.

There was a strong emphasis on engaging youth, who took part in information campaigns with community leaders and in public discussions  to confront sources of recent community conflict and identify ways to overcome them.

As people began interacting together regularly and in positive ways, they recognized that conflict had affected every person at some level, which connected them to each other. People began confronting their collective suffering and loss. The healing process was set in motion. 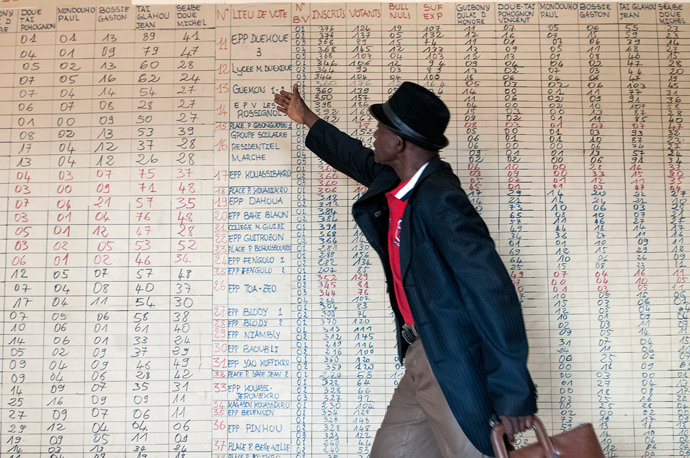 A local elections official in Duékoué, Côte d’Ivoire, explains the tabulation of votes from a previous election. Ahead of next week’s presidential election, USAID’s Office of Transition Initiatives has implemented activities focused on capacity-building of electoral institutions, improved access to credible information, increased inter-community dialogue, and widespread community mobilization and engagement in the electoral process. / Kendra Helmer, USAID

During the crisis, the government had a limited presence across the country and provided few public services. To strengthen government services to marginalized communities, USAID has supported renovations of government buildings and facilitated roundtables to encourage community involvement. USAID’s support helped the new government demonstrate that it was helping Côte d’Ivoire recover from years of stagnation. The new government’s improved public image helped increase trust for Ivorians to move beyond the conflict.

The infrastructure has improved, as well. It used to take 30 minutes to travel 2 miles — due to restrictive security measures, traffic jams and crumbling infrastructure. Today, noticeable investments in roads and bridges and increased commercial activity from new boutiques and restaurants now creates a perception that Côte d’Ivoire is finally healing from the conflict. 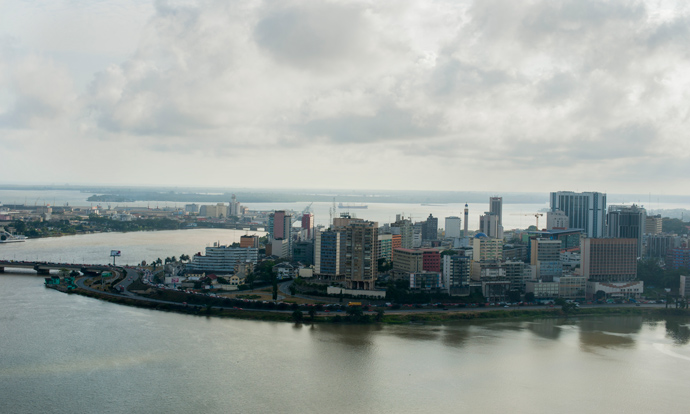 A view of Abidjan, the economic capital of Côte d’Ivoire. The country, which accounts for 40 percent of West Africa’s economic activity, is a leading producer of cocoa, rubber, coffee, cashew and palm oil and serves as the home of the African Development Bank and many international companies. / Kendra Helmer, USAID

As the country moved beyond the conflict, the economy quickly rebounded from economic decline. It now ranks among the top 10 fastest growing economies in the world — with 9 percent annual growth.

As a leading producer of cocoa, rubber, coffee, cashew and palm oil, as well as serving as the home of the African Development Bank and many international companies, Côte d’Ivoire accounts for 40 percent of West Africa’s economic activity.

The potential here is enormous, and there is no better place than Abidjan to observe the economic explosion. Towering modern hotels, luxury shopping centers and shiny banks are mushrooming throughout the pulsating metropolis. New roads and an expansive bridge spanning the lagoon have opened to provide vital links across the city. 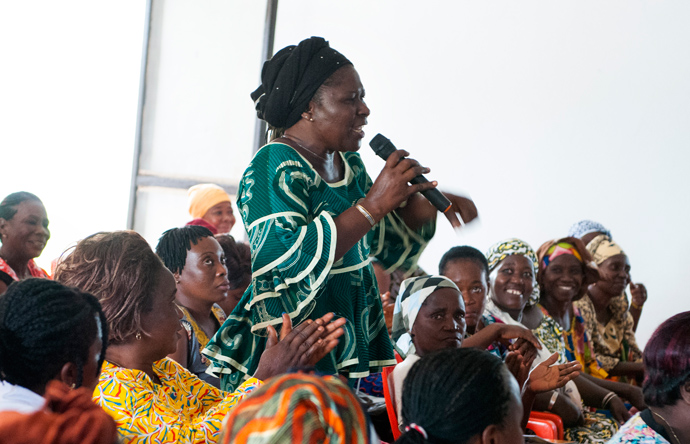 Women in Duékoué, Côte d’Ivoire, ask the mayor about the upcoming elections and other issues during a meeting Sept. 30. USAID’s Office of Transition Initiatives is supporting social cohesion activities, including the coalition of area women to strengthen dialogue and positive interaction between women from different ethnic communities. / Kendra Helmer, USAID

In a region increasingly threatened by terrorism, the country offers a strong contrast. Terrorist organizations like Boko Haram and the Islamic State are not gaining ground in Côte d’Ivoire. Strong community networks in addition to the nationally-focused security measures will help reduce the outside influence of violent extremist organizations.

This month’s vote is a critical turning point. Peaceful elections will show the world that Ivorians, young and old, have moved beyond the conflict and division of the previous decades. They will also serve as a reminder across Africa that international support for peaceful transitions is important for development and prosperity.

As for the youth, they understand that they are powerful change agents among their peers and the wider general public. With USAID support, they are becoming actively engaged in a peaceful electoral process to ensure their prominent place in their country’s future.

Mark David Emmert is the country representative for USAID’s Office of Transition Initiatives in Côte d’Ivoire.

« Q&A: How Power Africa is Investing in a Brighter Planet
Back in the Classroom: Displaced Students in Nigeria Find Education & Hope »
Categories: USAID