Bracing for El Niño: How USAID is Helping Countries Prepare and Respond

Our oceans, atmosphere and land are intricately connected. When the balance of one changes, it affects the others.

El Niño is a naturally occurring global phenomenon in which the tropical Pacific Ocean warms up more than usual. When this happens, precipitation, temperature and wind patterns can change. This year’s El Niño is predicted to be a strong event, triggering floods, drought, and fires in some countries while also affecting the path and number of tropical cyclones. It also has the potential to drive people from their homes, hurt their ability to earn an income, trigger food shortages, and increase or exacerbate vulnerability to other disasters. 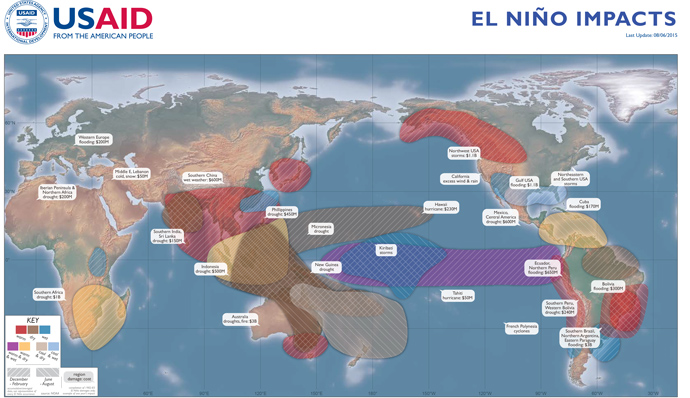 This map illustrates an average range of meteorological impacts caused by El Niño based on historical data. It also shows damages caused by the two most recent El Niño events. / USAID/OFDA

Even without El Niño, disasters take a heavy toll. In 2014 alone, natural disasters took the lives of more than 18,000 people, affected nearly 107 million others, and caused $97 billion in economic damages. But we are not resigned to let Mother Nature take its course.  Today, on the International Day for Disaster Reduction, we focus on how USAID is working with partners and communities to prepare for the shocks of extreme weather and other natural hazards. 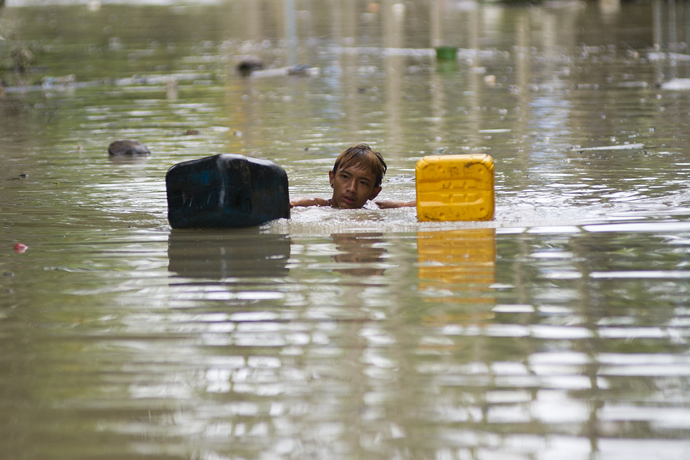 Disaster risk reduction is everything that we do to prevent or reduce the loss of life and damage caused by natural hazards like earthquakes, floods, droughts and storms. Recognizing the need to increase these efforts, nearly 170 countries adopted the Hyogo Framework for Action in 2005, a 10-year framework to make the world safer from natural hazards.

With the framework set to expire this year, the international community—including a delegation from USAID—gathered in March for the Third UN World Conference on Disaster Risk Reduction to reflect on the progress made over the last decade and, more importantly, to focus on what remains to be done to address shifting needs. At this conference, the Sendai Framework for Disaster Risk Reduction was adopted, showing the world’s continued dedication to reducing the impacts of natural disasters.

Through the Office of U.S. Foreign Disaster Assistance (OFDA), USAID responds to an average of 65 disasters in 50 countries each year. In just the past 10 years, we’ve responded to the 2010 Haiti earthquake, super typhoons in the Philippines, avalanches and hurricanes across Latin America, large-scale flooding in Asia, and the 2015 earthquake in Nepal. 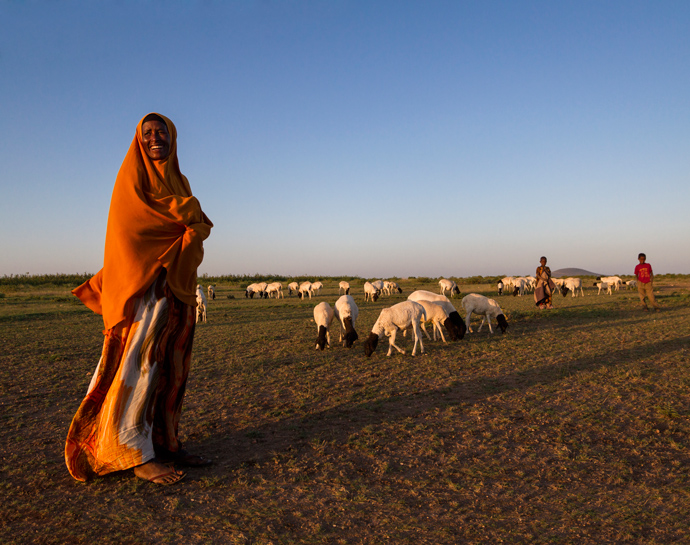 In Ethiopia, where drought and famine affect more people than any other type of disaster, USAID works to build the resilience of pastoral communities by providing emergency feed to sustain livestock, animal vaccinations to avert disease, and opportunities for farmers to diversify their income. / Kelly Lynch, Mercy Corps

But we don’t just respond to disasters. Since 1989, OFDA has worked with 130 countries to strengthen their ability to deal with weather-related hazards, including those caused by El Niño.

We do this by strengthening early warning systems and preparedness, like in Latin America; integrating disaster risk reduction with disaster response, as we did in Bangladesh; providing training such as improved farming methods in Afghanistan to help people withstand future disasters; and helping build resilience to the effects of climate change, as in Vietnam and Mozambique.

This year, we are also helping countries before, and during, El Niño to better prepare for the shocks of adverse weather and respond to people in need. 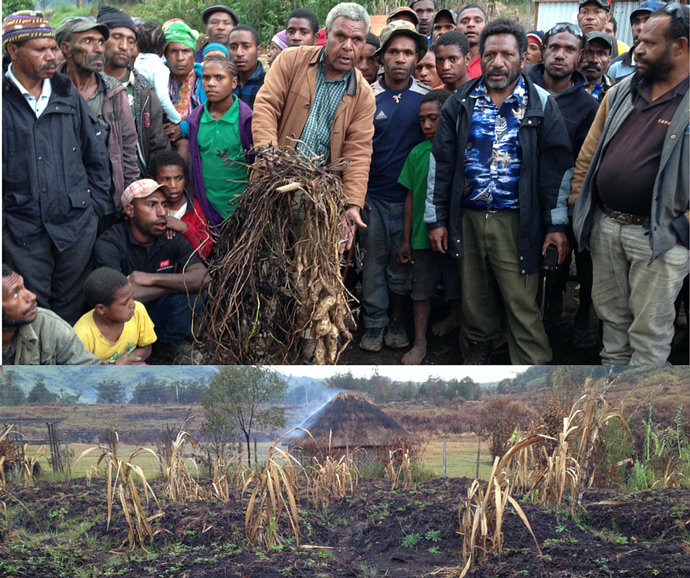 El Niño has already caused Papua New Guinea to be hit with both drought and frost, which damaged the country’s main sweet potato crop. USAID worked to get farmers back on their feet and help communities cope with drought. / Ben Hemingway, USAID/OFDA

In Papua New Guinea, El Niño has already begun to wreak havoc, bringing widespread drought that is causing a shortage in safe drinking water and plaguing crops—affecting an estimated 1.8 million people. To make matters worse, in August 2015, frosts descended upon Papua New Guinea, quickly killing much of the country’s staple sweet potato crop and leaving many rural villages to face food and income shortages. In response, USAID is working with the International Organization for Migration to provide agricultural training to farmers, as well as technical support to communities to help them cope with drought.

With each disaster, development gains are threatened as infrastructure is destroyed, poverty increases, and economic opportunities are interrupted or lost. Given this year’s El Niño predictions, focusing on reducing the impacts of natural disasters has never been more important.