To Fight Extremism, The World Needs To Learn How To Talk To Women

This blog is a condensed version of an article published in Foreign Policy. Read the full article here.

When I was in Pakistan about three years ago, a prominent female civil society activist told me how some women in northwest Pakistan were supporting militants by donating their most precious gold and jewelry and endorsing their sons’ radicalization.

We had been talking about engaging Pakistani women to de-radicalize youth, and she warned me that extremists were speaking more effectively than moderates to women, leveraging their influence in the home, family and the community. Women could help combat violent extremism, but it would require a concerted effort to reach out to, counter-message, and actively engage them.

Her message was clear: As violent extremist movements have strengthened, the international community needs to engage more intentionally with women in countering violent extremism. 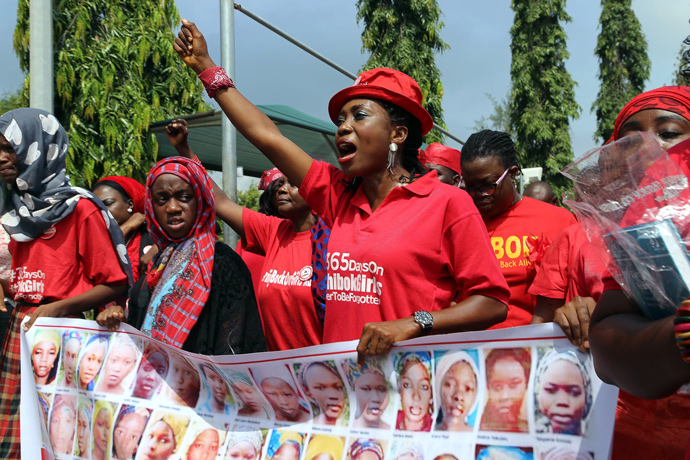 Members of the Bring Back Our Girls group campaigning for the release of the Chibok schoolgirls kidnapped by Boko Haram Islamists march to meet with the Nigerian president in Abuja, on July 8. / Philip Ojisua, AFP

Tools are already in place. The international community has passed several United Nations Security Council resolutions providing a foundation to better engage women in promoting peace and conflict resolution. U.S. policy has emphasized that women’s empowerment, protection and participation are vital to any effort to fight violent extremism.

Today, women and girls are facing unimaginable brutality at the hands of extremists. Since 2014, Amnesty International estimates 2,000 women and girls have been kidnapped, raped or forced into marriage by Boko Haram in Nigeria. And, according to the United Nations, approximately 2,500 women and children are being held captive in Syria and northern Iraq by the Islamic State; some 1,500 civilians may have been forced into sexual slavery.

During a panel discussion at the U.S. Institute of Peace in July, Zainab Bangura, special representative of the U.N. secretary-general on sexual violence in conflict, eloquently described the interconnections in the work of the Islamic State. She spoke of a “battle that is being waged on the bodies of women and girls” in which sexual violence has become a “tool of terror.”

Women and girls also suffer when violent extremism results in displaced communities. Since the onset of violence in Syria, early marriage has risen dramatically. The U.N. estimates that while about 13 percent of Syrians under 18 were married before the war, rates skyrocketed to 32 percent by early 2014.

Save the Children and Amnesty International have both pointed to economic drivers of increased early and forced marriage; desperate families receive a dowry for marrying off a girl while also reducing the number of mouths they have to feed. Reports of domestic violence have also risen.

Victimization only tells one piece of the story. Women have long been members of extremist groups. Media attention often focuses on female fighters and suicide bombers, though relatively few perpetrate attacks. That said, Syria experts estimate over 20 percent of the Islamic State’s recruits are female, and some 550 of the 3,000 foreign fighters from Western countries are thought to be women. 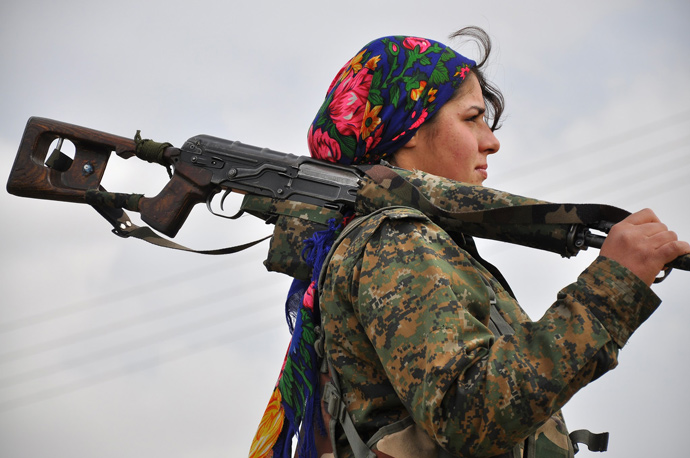 A Kurdish female fighter of the Women’s Protection Units looks on at a training camp in al-Qahtaniyah, near the Syrian-Turkish border on Feb. 13. Syrian Kurdish forces have been fighting advances by the Islamic State jihadist group. / Delil Souleiman, AFP

The group has developed messaging that romanticizes the need for devout women to help create a new society. As Islamic State members, these women are recruiting, teaching and building communities, and they are married to male recruits as an incentive for men to join and remain with the movement. They are also encouraged to reproduce to advance the creation of a state committed to the cause.

Perhaps most under-appreciated is the role of women as partners to counter violent extremism. Around the world, women often have influence within the family, giving them enormous potential to stem recruitment and radicalization. As community members frequently left behind in conflict zones to maintain the home and care for children, women and girls often have information that can provide early warning of conflict or the potential for violence.

Examples from around the world illustrate how women can stem violence and extremism. In Sudan, Hakamat singers — women whose songs can foster conflict by belittling other ethnic groups, decrying cowardice, and urging retribution — are promoting tolerance, coexistence and peace. In Somalia, the cross-clan linkages women gain through marriage are used to help mediate. In Central America, women can be key voices in discouraging young people from joining criminal gangs and committing crime.

Along the Tajik and Afghan border, Sisters Against Violent Extremism is establishing schools to teach mothers about preventing the radicalization of their sons. Over 150 mothers have reported reconnecting with distant sons and daughters, persuading them not to attend illegal meetings or read radical material. Two groups of mothers have organized meetings with local police to increase understanding of the role women can play.

Building on this knowledge, USAID is engaging women and girls to counter the rise of violent extremism. In Kenya, USAID is  teaching women about peacebuilding and de-escalating conflict. In Niger, Chad and Burkina Faso, USAID funds the use of radio, social media and civic education to elevate voices of non-extremist women and men. And in many parts of the world, we seek to strengthen the role of women and youth in political and peace processes.

But, we know the international community needs to do more to effectively engage women in countering violent extremism. A critical first step is incorporating gender equality and women’s rights in every facet of society. But that is just a starting point.

In July, experts came together to identify how international development stakeholders could elevate the role of women in countering extremism at a forum organized by the U.S. Institute of Peace, USAID and the State Department. Among their conclusions was the need for the United States to broaden its support for networks of women and youth in communities challenged by violent extremists.

For the international community, the remainder of 2015 is full of opportunities to strengthen these efforts. It is a moment that the world can’t afford to miss.

« Overcoming the Stigma of Disability Across the Globe
Empowering Voters One Mobile Phone at a Time »
Categories: USAID · Women