Posted by Anibal Barrera Santay on Monday, May 11th 2015 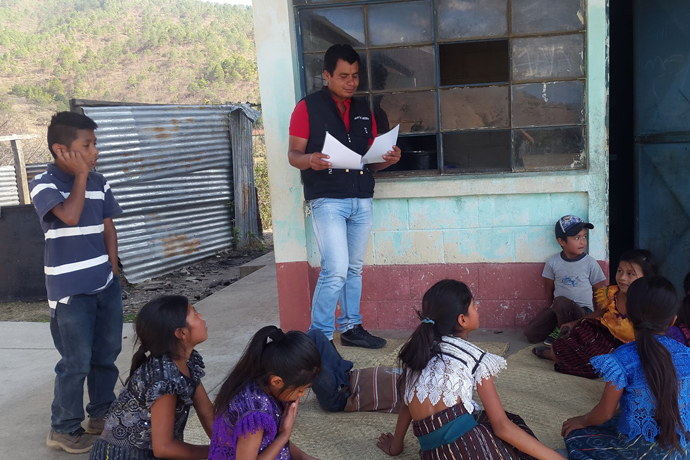 In chasing the “American dream,” 21-year-old Guatemalan Andrés Ixcuná Mateo tried to cross the border into the United States twice but failed. He says the experience of being arrested by immigration authorities and spending several days in jail traumatized him.

But after returning to his hometown of San Andrés Sajcabajá, he began serving as a community volunteer with the Leer Juntos, Aprender Juntos project to help children learn to read in the Mayan language of K’iche. The experience of giving back to his community and helping preserve their indigenous culture helped him start to overcome the emotional and physical hardships he endured in his pursuit of a better life.

Now, he’s filled with a renewed hope for a better future in his hometown.

“I suffered very much, and I do not wish that on anyone,” Andrés said at a training session for volunteers in March, about one year later. “Now that I volunteer for this project, I have realized that one can do many good things and help boys and girls so that they can be someone important.”

Implemented by Save the Children with support from USAID, the three-year project Leer Juntos, Aprender Juntos — which means “reading together, learning together” — aims to improve the readings skills of children in rural, indigenous communities in Guatemala and Peru in their mother tongue. In San Andrés Sajcabajá, the program includes community action activities to improve literacy in the the K’iche language, alongside in-school activities. 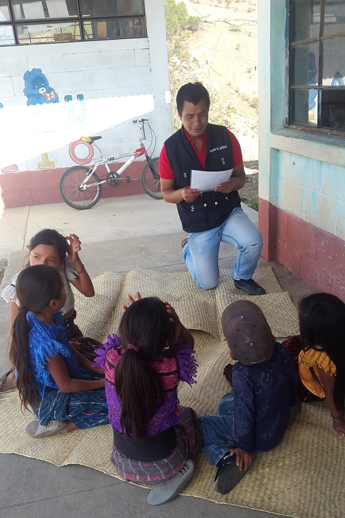 The project is part of USAID’s global education strategy to improve the readings skills of 100 million children in primary grades around the world. These skills are essential to students’ success in later grades and open doors to better economic opportunities once they become adults.

In the beginning, the project staff in San Andrés Sajcabajá had trouble recruiting volunteers. While searching for young people who might be willing to give up their time to help children learn to read outside of school hours, they contacted the principal of the community school, who referred them to Andrés–who had recently returned to his hometown.

Andrés, who was living at home and reflecting on what had happened to him, had graduated as a primary grade teacher before trying to emigrate. After meeting with the project staff, he agreed to join the team.

The Leer Juntos, Aprender Juntos project changed Andrés’s life and encouraged him to seek new horizons in order to improve himself and improve his family. After two volunteer trainings, he came to understand that it is possible to achieve “self‐improvement through education,” as he termed it.

Andrés is one of the volunteers who continues to be committed to the project, and this year he has taken up another year‐long commitment to lead community actions being implemented by the project in his village. He has also decided to enroll in the university to continue his studies.

Andrés told the 93 young colleagues assembled at the March training: “Take advantage of these spaces for learning, and the studies that your parents are facilitating. Do not think about migrating to another country, because in Guatemala there is space for you to act and seek your self‐improvement.”

Anibal Barrera Santay is a Community Action Officer with the USAID-funded program Leer Juntos, Aprender Juntos (Reading Together, Learning Together) at Save the Children.

« Riding the Growth Bubble in an Increasingly Urban World
Growing Children, Trees and Science: The Work Towards an AIDS Vaccine »
Categories: Education and Universities · USAID · Youth